Review: Only One Regret by Natasha Madison (Only One #5) 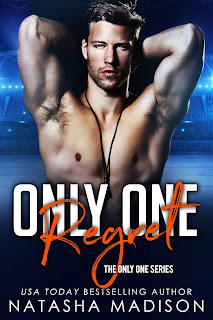 Note: An advance reader copy (ARC) was provided by the author via Wildfire Marketing Solutions.
Five books in, and I've yet to hit my threshold for all things Only One. Heck, I don't think I'll ever get enough of Natasha Madison's hockey romances, and that has a lot to do with the cast of characters she's come up with. One series, Something So, has expanded to two spin-off series, This Is and Only One, with the latter going from what I expected to be four books (just like the two other series) to double that. Am I complaining? Most certainly not. I have three words for Madison and her addictive hockey romances: Keep. 'Em. Coming!
Only One Regret is Cooper Grant and Erika Markinson's story. Cooper is twenty-six and a professional hockey player with the Dallas Oilers. He's also a soon-to-be single father to two daughters, Emma and Mia. Erika is thirty and has been Cooper's agent since he was drafted at eighteen. The two are best friends, and that's all they've ever been. That is, until one night of drinking and partying leads to them crossing a line. Will they regret it, and would it even be possible for them to go back to just being friends or are they hoping for more?
Friends-to-lovers is one of my go-to romance tropes, but add it to another of my favorite tropes, single parent, and well, I was all for it. Natasha Madison did not disappoint, and I absolutely enjoyed seeing Cooper and Erika go from best friends to so much more. It almost felt natural and inevitable with them, and I appreciated that there wasn't any sort of drama with regards to the ex, family, or work. These two were sweet to and supportive of each other, and their love story made me smile. I'm awarding Only One Regret five stars.
-------------------------
Read my reviews for the Only One series: