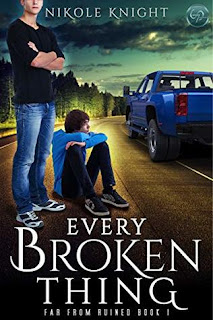 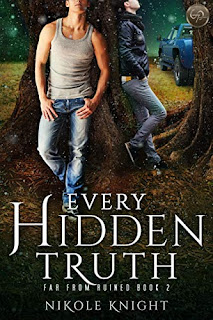 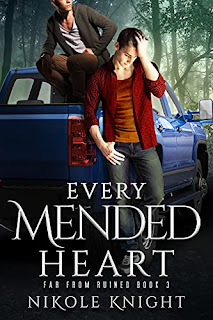 Note: Review copies were provided by the author via Gay Romance Reviews ARC Team.
I've read and loved a couple of Nikole Knight's short stories, so when the opportunity to read something that was more full-length came along, not only did I choose to read one book, but I went for an entire trilogy! Knight's Far From Ruined series tells the journey of Silas Brigs and Ben Adams, which plays out over three titles--Every Broken Thing, Every Hidden Truth, and Every Mended Heart. This basically means that the books MUST be read in order because there is a continuing story line that features one couple, Silas and Ben.
Every Broken Thing is where Silas's and Ben's paths intersect for the first time, and while that meeting finds Ben rescuing Silas, being around the former serves as a reminder for the latter of the traumatic events that night. But they're bound together by those very same events, alongside this irresistible draw they have to each other. It's here where we see the laying down of the foundation of Silas and Ben's relationship. It's clear that Ben has a secret and Silas is wary, but the potential for more for them is promising. 4.5 stars.
Every Hidden Truth is the continuation of Silas and Ben's story, and the two are trying to build upon the still somewhat shaky foundation of their relationship. Silas has some very fortified walls, but Ben sees him as someone worth scaling said walls for. Creating something more is going to take more time and more trust, but you can see that these two are willing to put the work in. This book also digs deeper into what Silas and Ben have experienced and endured in the past. Nikole Knight continues to impress. It gets 4.5 stars.
Every Mended Heart is the third and final book in the trilogy, and Silas and Ben were truly put through the wringer. My heart so broke for these two. Their pasts aren't necessarily the easiest to simply leave behind, not when they've left the kind of lingering scars that they have. However, their story--and this book in particular--reminds us that the best things in life are the ones we have to work hard for, and in the case of Silas and Ben, it was their happily-ever-after. This author is absolutely worth keeping an eye on. 4.5 stars.
Dates Read: 23-25 October 2021
Learn more about Nikole Knight.
Purchase the Far From Ruined trilogy on Amazon.