Review: No Strings by Nikki Ash 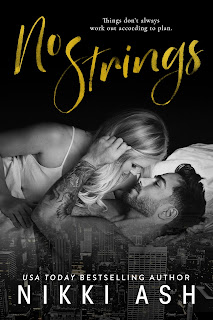 Note: An advance reader copy (ARC) was provided by the author via Enticing Journey Book Promotions.
Nikki Ash has a brand-new standalone, and it's single-parent romance with major friends-to-lovers feels. No Strings is the story of Savannah Cartwright and Benjamin Fields. At twenty-four, Savy has just gotten recently divorced and made the move from being a CPA in Tennessee to a CFO in New York. Ten years her senior, Ben is a single father to a fourteen-year-old son named Brody, and he owns Fields Enterprises. While Savy may have had a failed marriage, she still has dreams of white picket fences and happily-ever-afters. On the other hand, Ben isn't one for commitment nor for settling down, and he's certainly not looking to have any more children. But Savy is unlike any woman he's ever met. She's quickly bonded with his son, and she makes Ben feel things are foreign to him. They could protect their hearts if there are no strings attached. Right?
The minute I started reading this book, there was no turning back. I loved seeing Savy and Ben go from two people who were nothing more than residents in the same condo building to realizing that they shared ties and then went on to become friends and more. It's that journey from strangers to evolving into becoming the most important people in each other's lives that matters to me, and when their story is written well, the more it becomes a fulfilling reading experience for me. Another thing that I appreciated in this book was Brody and seeing how his relationships with the adults in his life were vital to his becoming a more mature and responsible young man. There was a great deal of character development for the three most notable characters--Savy, Ben, and Brody--and their story was most certainly one of my favorites this October. No Strings gets 4.5 stars.
Release Date: 21 October 2021
Date Read: 20 October 2021
Learn more about Nikki Ash.
Purchase No Strings on Amazon.