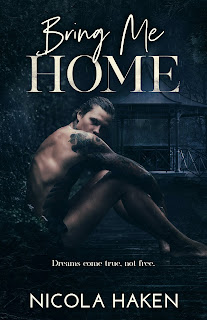 "You told me once, a long time ago, that sometimes, being you felt like being colour blind while having to listen to everyone tell you how colourful the world was. Well, I need you to know, without you my world would be black as hell. And I'm not saying this to make you feel guilty, but if you ever get to that point again where you're searching for one thing to pull you back...let that be it. Think of this moment and believe it, believe that even on your darkest days you're the brightest thing in my life."

I can't believe it's been nearly three years since I last read something penned by Nicola Haken! So, imagine my absolute joy at learning that she had a new standalone for fans and readers. Bring Me Home is the title, and it features the story of two best friends who were inseparable from the time they were four but their paths diverged at nineteen. Hugo Hayes would go on to achieve unimaginable success as a bona fide pop star and move to the United States; and Helen Jenkins would graduate from university and begins to pursue her dream of starting her own fashion line while remaining in the United Kingdom. It's been eight years since Hugo won the talent show that changed his life and left without being able to say goodbye to Helen, soon after cutting off communication with her. She's only gotten glimpses of the boy who was her best friend on the news and social media, so Helen does not expect to see Hugo standing in the rain at her front door.
So much angsty goodness! Gah! I've missed Nicola Haken's writing. This author knows the way to my angst-loving heart, and she's made up the almost three years since I've read her books with this gem of a read. I absolutely adored Helen and Hugo, and their friendship was one that had a strong enough foundation to withstand distance, abandonment, and estrangement. There's also more to their story than reunited friends who rekindle their friendship and then become more. Hugo is autistic and suffers from depression, and I appreciated Haken's treatment of both her male main character's autism and mental health. She presented them with care but in a straightforward manner and without romanticizing either one. On the other hand, I must applaud her again for making Helen a plus-sized female main character minus the fat-shaming. From beginning to end, I loved everything about Bring Me Home, which receives five-plus stars.
Release Date: 11 October 2021
Date Read: 10 October 2021
Learn more about Nicola Haken.
Purchase Bring Me Home on Amazon | Apple Books | B&N | Kobo.