Review: Read Between the Stars by Natalie Parker 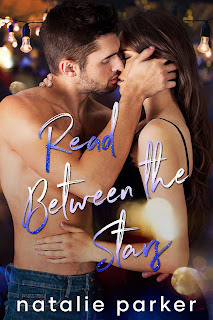 Note: An advance reader copy (ARC) was provided by the author via Give Me Books Promotions.
Well, hello, Natalie Parker. Where have you been my whole reading life?! Parker is a new-to-me author, and Read Between the Stars is my introduction to her writing. This is a spin-off of her Turn It Up series, which I've obviously yet to read. To be honest, had this not been marked as a spin-off, I would have hesitated more than usual because I prefer reading books in a series in order. When I saw that it was being considered as the fifth book, after all, I was a wee bit worried. After having finished the book, though, it actually read quite well as a standalone. Yes, there's one couple from the book prior to this one that are notable peripheral characters, yet I never feel lost or confused while reading this.
Read Between the Stars is a story of two people who have the opportunity to find love, home, and family with each other, if only they'd take the chance to open themselves to it. Ben Isaak still grieves the loss of his beloved wife five years prior, leading him to leave everyone and everything he knew behind in Seattle, Washington for Bali, Indonesia. When his dearest friend insists he attend her wedding, he begrudingly does so, expecting to return to Bali soon after. But then he meets the groom's sister, and the single mother and her daughter capture his attention...and maybe even his affection. Kasey Conlin's world revolves around nine-year-old Luna, but Ben knocks her world off its axis. She's a recovering addict who's only experienced disappointment and rejection from men. While Kasey is drawn to Ben, can two broken people have a future if they don't face their pasts?
The single-parent trope is one of my favorites when it comes to romance reads, but add to that the whole idea of second chances--not to be confused with the second-chance romance trope--and feel free to stamp "sucker" on my forehead because then I'm all in. Natalie Parker, being a new-to-me author has left me impressed with her storytelling. I enjoyed reading Ben and Kasey's story, one that they share alongside Kasey's daughter, Luna. These two had gone through quite a bit of heartache prior to meeting each other, and life-altering events have left them with some understandable trauma. ONe of my favorite things about this book is the journey Ben and Kasey take as individuals and a couple so as to be the best versions of themselves. Five stars go to Read Between the Stars.
Release Date: 14 October 2021
Date Read: 13 October 2021
Learn more about Natalie Parker.
Purchase Read Between the Stars on Amazon.