Book Spotlight: You Can Go Your Own Way by Eric Smith 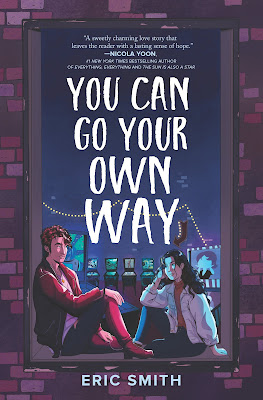 You Can Go Your Own Way
by Eric Smith
Release Date: November 2, 2021
Inkyard Press
About You Can Go Your Own Way
“A sweetly charming love story that leaves the reader with a lasting sense of hope.”
—Nicola Yoon, #1 New York Times bestselling author of
Everything, Everything and The Sun Is Also a Star
No one ever said love would be easy…but did they mention it would be freezing?
Adam Stillwater is in over his head. At least, that’s what his best friend would say. And his mom. And the guy who runs the hardware store down the street. But this pinball arcade is the only piece of his dad that Adam has left, and he’s determined to protect it from Philadelphia’s newest tech mogul, who wants to turn it into another one of his cold, lifeless gaming cafés.
Whitney Mitchell doesn’t know how she got here. Her parents split up. Her boyfriend dumped her. Her friends seem to have changed overnight. And now she’s spending her senior year running social media for her dad’s chain of super successful gaming cafés—which mostly consists of trading insults with that decrepit old pinball arcade across town.
But when a huge snowstorm hits, Adam and Whitney suddenly find themselves trapped inside the arcade. Cut off from their families, their worlds, and their responsibilities, the tension between them seems to melt away, leaving something else in its place. But what happens when the storm stops?

An Excerpt from You Can Go Your Own Way
“Do you need to talk?” Chris asks, and I glance back at him. “I mean, I can hang a bit longer if you need me.” He digs around in his pocket and pulls out a little candy bag and waves it at me, the plastic crinkling. Swedish Fish. Not the regular kind either; the tropical sort, with orange, pink, purple, and off-white fish in the mix. He shakes it until one drops out onto his hand, and he holds it up between his fingers. “I grabbed a bag at the CVS before I came over here, for my dads. Didn’t realize we’d have to use it, though.”
“Oh, God, no,” I whine. “If you’re gonna do that to me, just leave.”
Whenever Chris’s parents want to talk about “big feelings,” they break out these Swedish Fish candies. Have something important to say? Out comes the candy. It’s usually something critical that might make someone feel upset, but it’s the way you’re feeling, so it’s good to get it all out. Then pair it with something that makes you feel good while you’re hearing something that might make you feel bad.
It was a tradition Chris first told me about when we were really little, and one that’s been ongoing. I’m not quite sure why Swedish Fish are the candy of choice, but I’m guessing it’s because you can buy them in bulk at the South Philadelphia IKEA. He’s since introduced it to me and all our friends. Tell someone how you feel, let them eat the candy, and take in all those thoughts and emotions. Or, give someone the opportunity to say how they’re feeling, and take it all in. Simple enough. And while we don’t practice it at home, my mom often likes to say, “Do you need a fish?” when she thinks I have something I need to talk about.
I hate it so much.
“I hate this so much,” I grumble and pluck the fish from between his fingers.
“Listen,” he says, reaching out and closing my good hand around the candy. “You’re upset. You’re thinking about Whitney and the Mitchells. Nick and the boys. Both of those sound like terrible West Philadelphia indie rock bands. And you’re thinking about maybe going on Twitter and saying something snippy on social media. That what those pictures are for? Yeah?”
“N-no.” I barely stammer the word out. “It’s for…insurance.”
He gives me a look.
“You’re the worst.” I glower at him.
“Nothing good ever comes out of these little fights you have with Whitney online.” He presses, pointing at me. “All you do is get all the stores in the neighborhood riled up, dunking on one another. As if you get points for dunking on people online.”
“You’re the one who taught me how to use social media.”
“Don’t give me the whole ‘I learned it from watching you’ thing. Resist the urge to go online. It’s a waste of your energy,” he says, nodding at me. “Save your online presence for posting your pinball puns and facts. Now, eat your candy.”
“No.” I glare at him.
“Fine, fine.” He smiles, shaking his head, and pulls out his phone. “I’m gonna head off to NextFab. You behave.”
“Ugh, can’t you just work on your weird woodworking coffee things in the workshop?” I groan and gesture toward the red door on the other side of the arcade. “Then you could just be here all the time.”
He laughs and then sighs. “What are you going to do here without me?” he asks.
“Hmph,” I huff. “Probably have a meltdown on the regular.”
He reaches over and taps the screen of my phone, and my eyes flit up to him. “Don’t do it, and you’ll be fine,” he says and then bends over to grab his backpack. It’s this beaten-up leather thing that looks straight out of an old movie. I half expect to see it filled with vintage books tied together in beige string, but I know it’s just full of woodworking tools, and depending on the day, some glassblowing stuff. It’s not lost on me that my best friend spends all his time creating beautiful new things out of nothing, while I stress over repairing machines older than I am every single day.
He walks out of the snack bar and toward the door but stops and turns around.
“And hey, if you need to talk—” he throws something, and I reach out to catch whatever it is that is flapping its way toward me; the plastic bag of Swedish Fish makes a loud crinkling sound as I grab it out of the air “—text me. But I’m gonna want pictures of you eating your candy. It’s important that you trust the process.”
He’s out the front door, and I’m alone in the arcade with his candy and my phone.
Excerpted from You Can Go Your Own Way by Eric Smith
© 2021 by Eric Smith, used with permission from Inkyard Press/HarperCollins

Eric Smith is an author and literary agent from Elizabeth, New Jersey. When he isn't working on other people's books, sometimes he tries to write his own. He enjoys pop punk, video games, and crying during every movie. He lives in Philadelphia with his wife and best friend, Nena, and their son, Langston.
Connect with Eric
Website | Twitter | Instagram | Goodreads