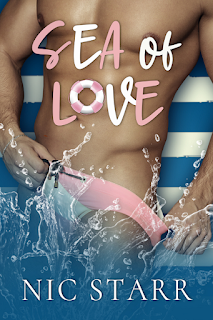 Note: An advance reader copy (ARC) was provided by the author via IndiGo Marketing & Design.
Sea of Love is a new book from Nic Starr and it features a cast of characters who take part in a reality dating show but with two of the couples not really being all that couple-y. Evan Williams is on the show as a favor to his sister's best friend after she gets cheated on by her ex. On the other hand, Harry Bishop is participating with his ex after getting badgered and guilted into it. Both Evan and Harry know that they only have to pretend to be happily coupled up with their respective partners for two weeks, but what happens when they find themselves drawn to each other? Will Evan and Harry be left adrift or could Sea of Love help these two set sail towards true love and their happily-ever-after?
This was a fairly lighthearted read with an interesting pair of main characters, Evan and Harry, who I felt were overshadowed by a supporting character, Amber, aka Evan's sister's best friend. The story itself held promise, but while it got off to a strong start, it felt like it muddled along for the most part before Evan and Harry decided to make a go of it. They were a highly likable twosome, though, and I was cheering them towards their happily-ever-after because how can you not want them to be together, right? Amber, however, was such a standout, and I enjoyed seeing her come into her own and have a strong friendship with Evan. Overall, Sea of Love was okay but left me wanting. 3.5 stars.
Date Read: 23 October 2021
Learn more about Nic Starr.
Purchase Sea of Love on Amazon.