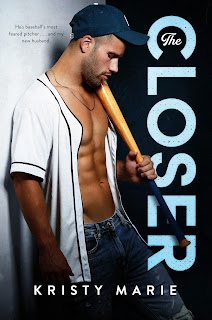 "Are those zip ties?" I try to appear like this level of crazy doesn't scare me.

Kristy Marie's newest novel was exactly what cynical but romance-loving heart needed this weekend. The Closer is a marriage of convenience romantic comedy, and it's the third book in the author's 21 Rumors series. Yes, the series has a title, and the first two books, IOU and Subscriber Wars, both of which were memorable reads for last year. This new book also shares ties with Rebellious, the first book in the Commander Legacies series. All that being said, you don't necessarily need to read anything prior to diving into The Closer in order to fully understand or appreciate it. I want to note, however, that Cooper Lexington is the younger brother of Maverick Lexington, the male main character in IOU.
McKinley Parks is making do with what she has and living her life within her means. That's what she's been used to doing for the past twenty-two years, and she knows nothing else. When her elderly best friend's grumpy grandson decides to involve himself in her affairs, she's initially resistant to his help. Cooper Lexington may be known as "The Closer" thanks to his pitching prowess, but the twenty-three-year-old knows how to get what he wants off the field as well. Insisting that they get married so that she has access to his health insurance and she can help watch Pops, especially during Connor's away games. There's an end date to their marriage, but what if neither of them wants it to end?
This had that nicely balanced combination of romance and comedy with that Kristy Marie-patented quirkiness that I've begun to take note of in each of her books that I've read so far. McKinley and Cooper were an unforgettable couple that had such a memorable and endearing story. Each one had something to offer the other to make their marriage of convenience worthwhile, but as they spent more time together, it was clear that they were able to provide far more. In short, they were what the other didn't know they needed AND wanted. Pops was awesome and I adored seeing Maverick and Ainsley enjoying their happily-ever-after. The Closer garners five-plus stars and is a 2021 favorite.
Date Read: 16 October 2021
Learn more about Kristy Marie.
Purchase The Closer on Amazon.