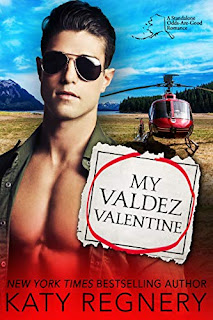 These last three months have been the loneliest and emptiest of my life, and seeing Gideon, hearing his voice, touching him...all of it feels so good and so right, it's like sinking into a hot bath after running a marathon. It's like coming home.


I am so far gone for this series! Every single novel Katy Regnery has released in her Odds-Are-Gone series has bolstered my faith in these books set in the U.S. state of Alaska and reiterated that the wonderfulness I experienced from Single in Sitka when the first part was originally published in the multi-authored One Hot Summer anthology. We're now on the fourth book, and goodness, but could I love this series more?! In My Valdez Valentine, things go a bit differently because while the male main character has indeed placed a personal advertisement in the Odds Are Good magazine, the female main character doesn't answer it. Instead Addison DeWitt, a renowned divorce lawyer and one of three partners of a private law firm based in Los Angeles, California, notices said ad and does head to Valdez, Alaska, but her trip there is sudden and spurred by a phone call from her twin brother, Elliot. It's there that she meets Gideon Grigoriev, owner and operator of Ad Astra, a local company specializing in heli-tours. She needs his help locating her brother, but will they find him in time and could they end up finding something neither of them is prepared for? Will their differences be too much for them to overcome?

Addy and Gideon's story basically plays out in two parts that I call BE and BO: Because of Elliot and Because of Orange. I'm not going to explain how I cam up with those labels, and this is where I encourage you to read the book. Each one is a standalone, so you can jump in at any point free of any worry that you're going to miss out on something from a previous book. There are no recurring characters and the only tying all the books together is the fact that the male main characters have personal ads in Odds Are Good. Addy and Gideon are as opposite as you can get, but their story highlights that some stories are about love, compromise, trust, and communication. There were about three points in the book where I did need to reach out for a couple of tissues, but I want to stress that this isn't an overly heavy read. Yes, there are angsty moments, but it's an honest-to-goodness story of finding love in the midst of the most dire of circumstances, and that while the road to happiness doesn't always come with a clear set of directions, when the person you're meant to be with is by your side, the destination doesn't really matter as long as you're together. With Katy Regnery, though, the destination is always clear--a happy ending, and boy, does she make the journey getting there one you'll be glad you took. Five-plus stars go to My Valdez Valentine. ♥