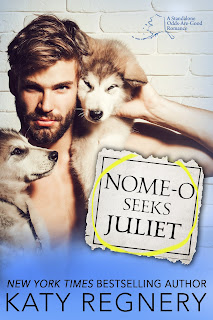 I place his hand over my heart. “Forever was always possible.”


I honestly didn't think I would need a tissue for this book, and I was right because I ended up needing more than one! I've loved many of my Katy Regnery reads, but there's something--no, make that several somethings--that's made Nome-o Seeks Juliet have such a major impact on me. A lot of it has to do with a recent life-changing event I'm still trying to wrap my head and, most especially, my heart around, but I don't want to go into it here because it may be considered spoilery if I mention how what happened in my life connects to the novel. Suffice it to say that I shed a lot of tears but it also gave me new insight on what I was going through and certain feelings of guilt that I've been struggling with. So yes, this book hit me in ways I never expected, and that's just part of why it's now become not only my favorite read from this author but one of my all-time top reads in all my decades of reading romance.

Nome-o Seeks Juliet is the second novel in Katy Regnery's Odds-Are-Good series, and while The Odds are Good is a magazine known for the personal advertisements placed by single men all around the state of Alaska, the ad from a man in Nome, Alaska isn't seeking a woman to share his bed with. Thirty-five-year-old military veteran turned musher Cody Garrison is looking for a woman to share his sled with in order to race the Qimmiq Mixed Doubles 200 with him. That would mean three months of spending time and training together, but Cody's been awkward with strangers since he was honorably discharged thirteen years ago, preferring the company of his eighteen sled dogs and one furry constant companion in his home, Viola. When University of Minnesota veterinary student Juliet Sanderson answers Cody's ad and shows up in Nome, getting used to her presence was one thing, but finding himself falling for her was a whole 'nother thing. Juliet was a decade younger, needed to finish her degree in Minnesota, and then work for her father's practice in Montana. She'd never fall for a broken man like Cody. Right?

I don't think I could have loved this story and these characters anymore than I already do. Cody was different from the self-confident boy he was before he entered the military to the man who came back with disfigured hands after he'd left the service. My heart went out to him because even though he had a couple of close friends and his beloved dogs, he was leading a very lonely life. Then along came his Juliet... Gah! She was dedicated to whatever and whomever she put her heart in, and that included mushing in general and Cody and all the dogs in particular. One of the best surprises that this book gave me was the direction that the author took the story in. I found myself smiling each and every time Katy Regnery would take the story and characters down a road I didn't expect. This book touched my heart and made me contemplate my own situation, but whether we share the same circumstances or not, I feel you'll fall in love with Nome-o Seeks Juliet as much as I did. This receives five-plus stars. ♥