Review: If It's Only Love by Lexi Ryan (Boys of Jackson Harbor #6) 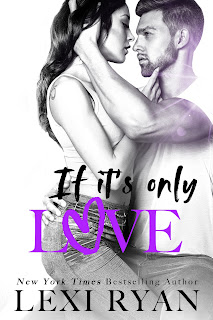 Does he know how fragile I am? Does he understand that I don't have the energy or the emotional fortitude to write my own love poem? “I already know. Same reasons I want to be with you, right?”

“Ask. Me.” He squeezes my hands, then whispers, “Please.”

The ending of a series, especially one that I've enjoyed, is always bittersweet, but the fact that it ends on a high note is like the proverbial cherry on top, as is the case with Lexi Ryan's Boys of Jackson Harbor series. All five of the Jackson brothers have gotten their happily-ever-afters, and now it's their only sister's turn and she gets a hard fought one with her brother's best friend in If It's Only Love. When thirty-four-year-old Easton Connor retires from the NFL, he knows that his hometown of Jackson Harbor is the only place he'd want to settle down and raise his nine-year-old daughter, Abigail, in. The Jacksons were family to him and it'll be good to have them close by, but it's one Jackson in particular he hopes to make amends to--thirty-year-old Shayleigh. It was thirteen years ago when he first showed her how he felt about her. But he had just been drafted to the NFL and she would be off to college soon enough. It would be another three years before their paths would cross again in Paris, only for them to go their separate ways again. Easton wants to show Shay he's all in this time, but the third time may not be the charm.

Gah! This book had me all stressed out but in a good way. There was a lot of history between Shay and East, but it wasn't the sort that everyone else knew about. To be honest, there were a couple of times that I was sorely tempted to jump inside my tablet and smack Easton upside the head. I say a couple of times because there were two particular turning points in Shay and Easton's relationship that led them to go in different directions. There's also a point in the book where Shay's brother, Carter, says something to his best friend: "Maybe after the last two times, she's having trouble believing that this time you would choose her." Talk about major heart clench happening on my end. It isn't just the past issues that are hounding these two because Shay has her own situation going on, and it's something that I won't get into in this review because, hello, spoilers. Let's just say that it results into a complication that could make or break whatever chance they have for a future together. This is part of a series, but you could read it as a standalone (but go read the series anyway!). Five-plus stars go to If It's Only Love. ♥

Purchase If It's Only Love on Amazon | Apple Books | B&N | Kobo.