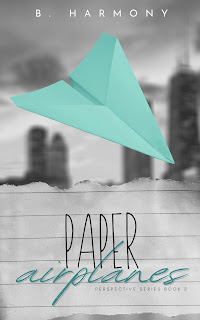 Note: An advanced reader copy (ARC) was provided by the author via Gay Romance Reviews Tours & Promo.
B. Harmony's The B-Side was one of my favorite debuts from last year. Since then, she's added a holiday novella, Christmas Carols, to the Perspective series, and now, the second full-length novel. Paper Airplanes is the story of a two men, one who no longer believes in relationships and the other who believes in happily-ever-afters. Just a quick FYI: This book can be read as a standalone, but there are recurring characters from the series starter and one of the main characters was introduced then, so if you have plans of reading that book, be forewarned that there may be potential spoilers in the second book.
Everett Sawyer has always put his work as an accountant first. He's worked hard at laying the foundation for his business, R.G.S. Capital Services, and at twenty-five, he has no plans of settling down anytime soon...or ever. When he returns to town, his best friend hopes Rhett will be able to help out the owners of Wicked Thorne Landscaping. He doesn't expect, however, to be as attracted to one of the Thorne bothers as much as he is. Thirty-two-year-old Damon Thorne ticks off all his boxes, but the big bear of a man has "forever" written all over him. Rhett doesn't want strings attached, but being with Damon slowly feels like more. Will Rhett be able to cut the strings if his heart's already attached?
This book was so adorably sweet! That doesn't mean that there wasn't any steam, because there was and a whole lot of it. I loved getting to know both Damon and Rhett, and even though I knew they were going to end up together, I was curious to see how they would overcome their issues, particularly Rhett's hang-ups regarding relationships. There isn't a whole lot of drama--thank goodness!--but there is a dash of angst alongside some appreciated wit and humor, making for a fairly lighthearted read. The supporting cast of nosy but well-meaning characters was a hoot and bonus points for Barkley! With two couples already getting their happy endings, I'm definitely looking forward to reading the third novel, this time featuing Rhett's best friend, Dylan. Five stars go to Paper Airplanes.
---------------------------
Read my reviews for the Perspective series: