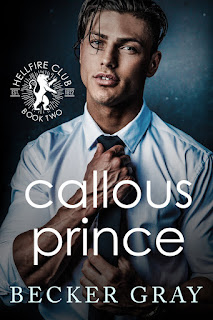 Note: An advanced reader copy (ARC) was provided by the authors via Candi Kane PR.
After reading Wicked Idol, I knew I was going to need to read the rest of the books in the Hellfire Club series, and Becker Gray did not disappoint. Callous Prince is the second novel and it's the story of a real-life prince who is more cruel than charming and a damsel who can save herself and even kick ass in the process, thank you very much. Lennox Lincoln-Ward is that prince, a member of Liechtenstein royalty, and Sloane Lauder is the girl he's decided to claim as his--his to hate and his to seek his vengeance on. You see, Lennox's father was involved in a Ponzi scheme, one that brought shame to their family and landed him in prison. The investigating and arresting agency was Interpol, and the man who made the arrest was none other than Sloane's father. Sloane intends to uncover all of Lennox's secrets, and that means getting close to the boy who's made it clear how much he loathes her. When everyone's truths are unearthed, who shall be left standing?
You know how they say that there's a thin line between love and hate? Well, when it came to Lennox and Sloane, for as thin as that line may have been, it was also quite jagged. There was no love lost between the two, although Sloane's feelings were more reactionary considering Lennox never really hid his hatred towards her. Now, I know this series is set in a private school, Pembroke Prep, and that the main cast of characters are all teenagers, but these books have a far more mature tone to them than the usual young adult (YA) romance fare out there. That being said, with the plethora of bully romances flooding the market over the past few years, I prefer the writing that Becker Gray has employed in these books. The stories are entertaining but there's a fair amount of depth to them, which is why Callous Prince gets 4.5 stars, and has me excited for more.
-------------------------
Read my reviews for the Hellfire Club series: