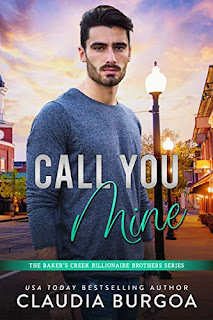 Note: An advanced reader copy (ARC) was provided by the author.
Claudia Burgoa returns to her Baker's Creek Billionaire Brothers series with the fourth release, Call You Mine. This is the story of two best friends who thought that all they were meant to be was exactly that--friends--but then all that was needed was a bit of time for them to realize that they were always meant for more. Beacon Aldridge is the youngest among his brothers at twenty-nine, but he may very well be the most well-known, what with him being the frontman of the popular and famous rock band Too Far From Grace.
Now that he's been forced to stay in Baker's Creek no thanks to his late father's last wishes, Beacon's best friend, twenty-seven-year-old cellist Grace Bradley thinks the hurdle to her finding the right guy is now out of the way. She knows Beacon cares about her, but he's been one heck of a cockblocker. However, luck still isn't on her side, but maybe if she moves to where he's at, he'll help his bestie out... right? So, why is it that it feels as if he may be interested in revisiting everything they gave up all those years ago?
Claudia Burgoa's books never fail to put a smile on my face, and the same goes for this newest release of hers. I liked getting to know Beacon better, what with him piquing my curiosity in the previous books. I know this is going to sound cheesy but Grace truly was the beacon in his life. Burgoa really did well highlighting how these two were meant to be. There's a bit of family drama times two (his and hers), but life would be boring without some drama, right? All in all, Call You Mine was an endearing four-starred read.
Release Date: 02 February 2021
Date Read: 01 February 2021
Learn more about Claudia Burgoa.
Pre-order Call You Mine on Amazon | Apple Books | B&N | Kobo.