Review: Branded by a Song by LJ Evans (Anchor #5) 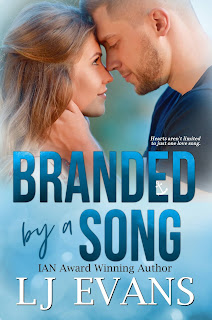 "You can love people differently without it being more or less. What you had with Darren you'll never ever feel again. But that doesn't mean what you feel for someone else won't be equally as strong."

No words. I swear, I don't think I have a vocabulary sufficient enough to aptly convey just how moved I was by this book. After having had the pleasure of reading all of LJ Evans's previous stories, you'd think there was no way possible she could outdo herself. Welp, that's exactly what she did, giving fans and readers what I believe is her best work to date. Branded by a Song is the fifth novel in her Anchor series, and while you can pretty much read it as a standalone, the male main character is a supporting character in the previous books, particularly, Guarded Dreams and Damaged Desires (Anchor #1 and #4).
Branded by a Song is the story of Brady O'Neil, who has found a great deal of success in the music industry. So why has the twenty-nine-year-old been feeling lost as of late? Maybe touching base with his former mentor will help him rediscover what's been missing in his music, but instead, he finds the woman's granddaughter. Thirty-four-year-old Tristan "Cari" Morgan is a widow and single mother held back by her past. She misses her husband, Darren, and her grandmother, and as tempting as Brady may be, she isn't sure she wants to risk her heart once again. Can Brady convince her they're worth it all?
I'm a sucker for a well-written single-parent romance, but add to that LJ Evans's own brand (pun not intended!) of storytelling, and well, there was simply no way I could have not fallen in love with this story and her characters. Brady was just...le sigh. Seriously! Gah! The man was a forced to be reckoned with, and he was on a mission to show Tristan that while she shared a one-of-a-kind love with Darren, they could have their own one-of-a-kind love as well. And Hannah was such a sweetheart, yet another tie that brought and kept them together. I was absolutely smitten by Branded by a Song; it gets five-plus stars.
Release Date: 03 February 2021
Date Read: 03 February 2021
Learn more about LJ Evans.
Purchase Branded by a Song on Amazon.