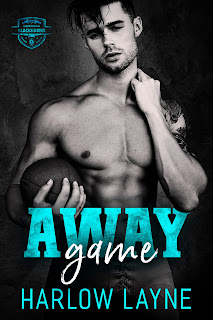 Note: An advanced reader copy (ARC) was provided by the author via Wildfire Marketing Solutions.
Harlow Layne is a new-to-me author and my introduction to her writing came by way of the first novel in her new series. Away Game kicks off the Willow Bay series, which is mostly set on and off the campus of Willow Bay University in California and is about select players of the school's football team, the Blackhawks. The series starter introduces readers to Finley Huntington and Weston Jackson as high school seniors and football players belonging to rival schools. Fin hates West and has no problem letting him know just how much. They come from very different backgrounds, and with them graduating, there should be no reason for their paths to cross...unless they end up in the same college...which they do. Being this close to the guy that stirs up his anger. When all is said and done, Fin and West are either going to kill each other or kiss one another to oblivion.
When it comes to first reads from new-to-me authors, I try to temper my expectations. The blurb for this book is what had me saying yes to it, and M/M romances are a personal favorite. I loved the story that the author wanted to share with her readers, however, I felt like the execution faltered at times. There wasn't much in terms of the journey that Fin took from embracing his sexuality. It was as if all it took was one conversation with his coach, and then he suddenly decided he was ready to try being with West. Then there was their relationship. I'm all for a happy ending, but I wished we had more "show" than "tell" because the former would have made me, as a reader, feel like I was part of their journey. There were also moments where I felt something was missing, like we jumped from Point A to Point D and skipped everything in between. There were also some inconsistencies plus stuff said that didn't really make sense. Don't get me wrong; Away Game held promise, and the writing was pretty good, but it left me wanting. Three stars.
Release Date: 04 February 2021
Date Read: 03 February 2021
Learn more about Harlow Layne.
Purchase Away Game on Amazon | Apple Books | B&N | Kobo.