Audio Review: Out in Winter by Lane Hayes, narrated by Michael Dean (Out in College #6.5) 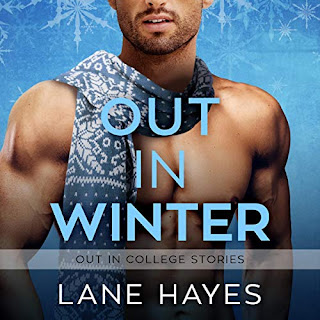 Note: The audiobook was provided by the author via IndiGo Marketing & Design.
I think it's fair to say that I'm a wee bit addicted to Lane Hayes's writing. I've read and listened to everything this author has written, and I make no apologies for it. Her latest audiobook is a novella in her Out in College series, and it's the story of Drew Hartley and Liam Perez, co-workers who may or may not have been crushing on each other for months. Drew is twenty-eight and is in graduate school and works two jobs, one of which is as manager of the same bistro that Liam temporarily works at. Liam is twenty-three and a college senior and member of the water polo team--water polo being a sport Drew knew close to nothing about prior to working at the bistro. Drew is openly gay and developing a crush on a straight guy like Liam is a bad idea. But no one ever said that Liam was actually straight. Still, what sort of future could two opposites like them have?
Penned by Lane Hayes and narrated by Michael Dean, this novella was a fun addition to the author's Out in College series. Drew and Liam's story was low on angst and high on lighthearted banter. I appreciated that both main characters were comfortable in their own skin, and the focus was more on exploring their connection rather than the usual exploration of their sexuality. Drew's hang-ups weren't necessarily the kind that were difficult to overcome, especially given that the age difference wasn't that huge. I loved how Liam was determined to show Drew that they deserved a shot at being happy together and that he was the perfect counterbalance to Drew's more serious nature. There are familiar "faces" that fans of the series will like crossing paths with again. Dean's narration is just the right accompaniment to Hayes's writing. 4.5 stars for Out in Winter.
Date Listened to: 07 February 2021
Learn more about Lane Hayes.
Learn more about Michael Dean.
Purchase Out in Winter on Audible.