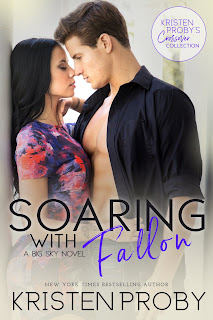 Soaring with Fallon is the newest book in the Big Sky series and it kicks off the multi-authored Kristen Proby Crossover Collection. This is Fallon McCarthy and Noah King’s story, and although there are recurring characters from both Proby’s Love Under the Big Sky series and its spinoff, Big Sky, as well as a few from the other books in the crossover collection, this can, more or less, be read as a standalone. Fair warning though: there could be potential spoilers regarding certain couples in the other books, so if you plan on reading everything that came before Fallon and Noah’s story in Proby’s series or anything after this story in the crossover collection, be aware.

Fallon McCarthy was a city girl who had a good career and good friends, but after the death of her beloved grandmother, she decided to reassess life as she knew it and left it all behind in New York. She became a nomad, but the two years she’s been in Cunningham Falls have been the longest she’s stayed in one place, earning a living as a yoga instructor. When she finds an injured eagle and reaches out to the Spread Your Wings sanctuary, she crosses paths with zoologist Noah King. One date leads to another, and Noah quickly develops feelings for the beautiful Fallon, but he’s wary about her being flighty, and he fears that if she decides to leave, she’ll take his heart with her.

Ah, this book has to be my favorite one in the series, thanks in large part to two really awesome main characters. I liked the idea of Fallon being like one of the birds that Noah took in and cared for. She flitted around until she made her way to Cunningham Falls and without realizing it, she had found a place to call her own, but it wasn’t until she and Noah found each other and that she saw that she had created a network of friends and family that Fallon had found home. Just like Love Under the Big Sky before it, the Big Sky series has become a favorite of mine, and I love that it’s been expanded to include stories from six other authors who have brought their own touch and flavor to the overall series. Soaring with Fallon was a very heartwarming five-starred read. ♥

Read my reviews for the Big Sky series: