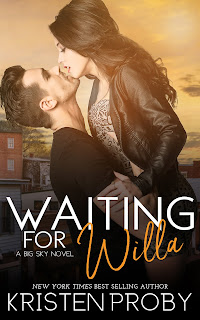 And there we have it--my favorite in Kristen Proby's Big Sky series! Waiting for Willa is the third full-length novel--but fourth release--in Proby's spin-off series set in the same small Montana town of Cunningham Falls that her Love Under the Big Sky introduced readers to a few years back. I've enjoyed the series so far, but you know how you have that one book that just gets to you and it becomes the one that has your heart totally invested in the story and the couple involved? That's what Waiting for Willa was for me, and while the reconciliation felt rushed (I'll explain more later!), this reminded me most of the authors's writing in her With Me in Seattle series of books.

Willa Monroe lost her husband, Cary, in a skiing accident when she was only twenty-two and pregnant with their son. She lay the blame of what happened at the feet of Cary's best friend--and the first boy Willa loved and who would later break her heart--twenty-three-year-old Max Hull. She told him to stay away from her, and he respected her wishes for nearly a decade. Nine years later and Willa has gone on with her life, and it's one that's centered around her son, Alexander, and her business. Max has been back in town for a few years, and now is time to forgive and forget. Except neither one has forgotten the love they once shared...one that still exists between them.

I loved this second chance love story, and it was one that had it's share of angst interspersed with a whole lot of romance and lighthearted humor. Single parent stories also hold a soft spot, and Alex was as much a part of the story as Max and Willa were. This was, after all, a love story that went beyond just one couple. This was about forgiveness, moving forward, and it was, ultimately, about family. I mentioned earlier that it felt rushed right after Willa decided to bury the hatchet with Max, and maybe they were trying to make up for lost time, but yeah, it was like they were moving fast forward instead of just forward. Still, I love Waiting for Willa enough to give it five stars. ♥

Read my reviews for the Big Sky series: