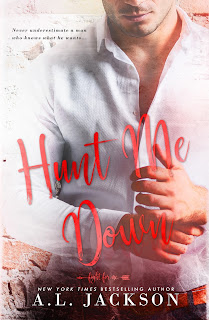 Originally released as part of the multi-authored Glamour anthology under the title Red Hot Pursuit and inspired by the classic Little Red Riding Hood children's story, Hunt Me Down has been re-published as a standalone novella in A.L. Jackson's Fight for Me series. This devilishly delightful enemies-to-lovers story has Broderick Wolfe III pitted against Lillith Redd. He wants the building Lillith's client owns and in its place, he plans on building a hotel that he's certain will surpass whatever lofty expectations his exacting father has. Unfortunately, Lillith knows all about his father's reputation, and while he knows that people thinking he was just like the man, he knows he's better and he intends to prove to Lillith that he's nothing like his father. From their fiery emails to flirty exchanges, Brody and Lily are playing to win, but in this hot game of hunter and prey, who between them is the hunter and who is the prey?

If you're wary about this being a novella and fear that it isn't as meaty as a full-length novel, fret no more! A.L. Jackson does not disappoint, giving readers a story worth sinking our proverbial teeth into and savoring every delicious bit of it. I liked that we were introduced to Broderick and Lillith but got to peel back the layers in order to get to know Brody and Lily. These two knew which buttons to push, but they were also quite meant for each other. Naturally, getting to their happy ending was not easy feat, but see, that's why this was such a great read. These two had to let go of their preconceived notions of one another and open themselves to the realization that their perceptions were wrong. This was the tale that introduced me to the small town of Gingham Lakes when it was in the aforementioned anthology, and I loved getting to read it all over again. I'm awarding Hunt Me Down five stars. ♥

Read my reviews for the Fight for Me series:

Show Me the Way (book one) - five stars - My Review

Hunt Me Down (novella) - five stars - My Review (posted above)

Purchase Hunt Me Down on Amazon.