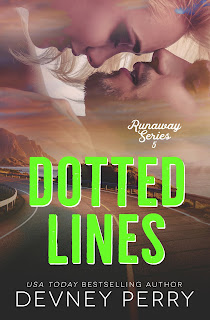 "God, it's good to see you." The words spilled out.A flush crept into her cheeks. "I wasn't sure you'd remember me."

"It could have been fifty years. A hundred. I will always know you."

Oh my God. This book... Gah! From the very beginning of this series, it was Karson Avery's story that I looked forward to reading the most. With each new book that was released, that anticipation grew, and now, it's bubbled over and has exceeded every single lofty expectation I'd had for it. Dotted Lines is the absolute perfect ending to the Runaway series, and while I hate to play favorite--oh, who am I kidding, I always play favorites! Yes, I admit it! This series ender is my favorite one in the series and one of my top favorites among everything I've had the privilege of reading from author Devney Perry.
From Temacula, California to Boston, Massachusetts and back again, the 1964 Cadillac DeVille that came from a junkyard had traveled far and long, and each of the drivers behind the wheel found what they were looking for. With each hand-off, it got closer and closer to its final stop and eventual owner, Karson Avery, and it would be Clara Saint James who would do that very last hand-off. He was nineteen and she was a year younger the last time they saw each other, and now, more than twelve years later, Clara has driven the Cadillac from Welcome, Arizona to Elyria, California. With her five-year-old son, August, by her side, will this be closure for everything she's ever wished she could have had with Karson, or will this be the opening to have the happy ending they deserve?
My heart was overwhelmed with all the feelings and emotions coursing through me as I was reading this book. Not only because of Clara and Karson's story, but because this was the culmination of a years-long journey for those six teenagers who became family in a junkyard in Temecula and found their way to the places they would call home as adults. I loved getting to know each of them, which makes this final book so darn bittersweet. It's like the end of an era, and I'm just happy I was able to be there for the ride in its entirety, relishing each pit stop Devney Perry led readers to. And that epilogue? It felt like a gift, and I, for one, cherish it. Le sigh. Dotted Lines gets all the stars that dot a clear night sky.
------------------------