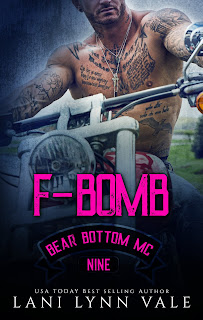 I'm not entirely sure if F-Bomb is the final book in the Bear Bottom Guardians MC, but whether it is or isn't, it feels as if Lani Lynn Vale has pulled out all the stops with this one, giving readers a member of the club who still comes off as an outsider than a bona fide, cut-wearing brother. Slate Alejandro Solis is a former police officer who ends up going after the man who shot him and his pregnant fiancée--who also happened to be his partner--and then ends imprisoned for ten years because of the crime. Now, Slate's free, but acclimating to life being the law enforcement officer the community once looked up to the felon with a rap sheet isn't easy and neither is having a thing for another man's wife. Slate had no clue that Harleigh Belle Tremaine was married when he first saw her while she was visiting someone in prison, but now, keeping his distance is best, even if they are next-door neighbors. So what if her father offers him a job and so what if she has a bad habit of trespassing on his property? He is not the sort of man who encroaches on another man's woman, but then he's never quite met anyone like the fiery Harleigh Belle.

What wasn't to love about Harleigh and Slate's romance?! These two were so meant for each other from the get-go, but boy, did they push each other's buttons like they were born to do it. From Harleigh's penchant for taking hours-long naps on the hammock on Slate's property to Slate's tendency to be quiet compared to Harleigh's more verbose personality, there was just no resisting these two. They balanced each other out really nicely and the bickering and back and forth was golden because I knew that when they would finally get together, it would be monumental. Like the rest of the books in this series, there's an element of suspense, and here, it was easy to figure out who the bad guy was but his motivation for his acts were somewhat of a surprise yet made a whole lot of sense. Now, I don't know if this ninth book is the last in the series because it did kinda-sorta-maybe feel that way, and because this series was my introduction to Lani Lynn Vale's writing, it holds a special place on my list of favorites. There was a side story concerning Dre and Craig that felt unfinished, so I'm wondering if there's more to come--and I'm hoping that, at the very least, we get some closure there. Either way, F-Bomb, both as a book on its own and as part of the series, was a standout read with its a recognizable humor and romance and gets five stars. ♥