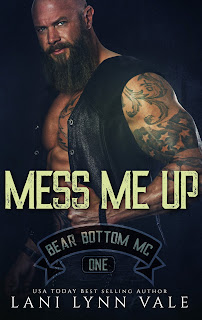 Lani Lynn Vale is one of those authors whose name and work I've come across many a time on Goodreads, and a lot of that has to do with her quirky use of word play. When the opportunity to read and review her latest release came along, I jumped right in because it was a series starter. Mess Me Up is the first in Vale's Bear Bottom Guardians MC series, although it did feel like a spin-off, what with at least one couple who seem to have had their story already told and then being so closely tied to one of the main characters here. Remember, I haven't read any of Vale's prior releases, so I confess that I felt as if I should have known who these people were and what their story was because it was like the prevailing assumption was that readers already knew the back story and all that.

Told in two parts and in dual perspectives, this is the story of thirty-three-year-old Romero Pierce, retired professional football player turned patched member of the Bear Bottom Guardians motorcycle club in Bear Bottom, Texas, and twenty-five-year-old Isadora Solis, a former member of the army and now an employee working for her parents' cleaning company while covertly starting her own cleaning business on the side. Rome may have loved playing football, but he loved his young son even more. When his world threatened to implode, he found solace in his club and in the letters he would exchange with someone he only knew as "RP's Biggest Fan". And then Izzy starts to work her way under his defenses, but Rome knows all too well what it's like to have people up and leave. When one thing after another threatens to completely break Rome, will he walk away or stand tall?

I found myself reaching for a tissue early on in the book, and then I needed a couple more for the duration of the first part of the story. There's a particularly heartbreaking event that happens in this series starter, and while I understood that this was the most likely and realistic scenario, it was no less sad to read. Rome and Izzy were good main characters and I liked getting to know both of them, although a lot of their back story is basically just told instead of it actually experiencing it alongside them. The character who stole my heart, however, was none other than four-year-old Matias, Rome's son. You'll understand why when you read the book. Suffice it to say, that boy alone receives the majority of the stars I'm giving this book because he was the truest heart of this MC romance.

There were a couple of inconsistencies in the story, one of which was Rome's grandmother and how it's mentioned that she and Rome were estranged yet she had been a part of Matias's life thanks to Rome's ex, but then Rome says later on that she had no relationship with his son. Huh? Add to that my feeling a little lost when it came to some of the side characters because it appeared as if they were a part of past series or were mentioned in passing before, and I find myself needing to scale back my overall rating for the book. It had a good story overall, and the cast was truly memorable, but with a hiccup here and there, Mess Me Up ultimately garners a rating of four stars. ♥