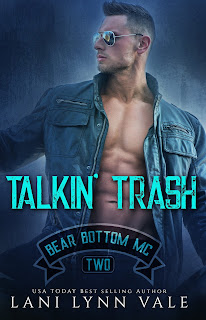 There's nothing trashy about the second novel in Lani Lynn Vale's Bear Bottom Guardians MC series, Talkin' Trash. This is one of those reads where two people who should have always been a couple finally get their acts together, but it isn't about them necessarily making up for lost time but more of them making the time to make a go of what's always existed between them. This is only my second Lani Lynn Vale read, but this series already has a soft spot with me, and I'm definitely curious more now than ever when it comes to the original Dixie Wardens stories.

She was only sixteen and he was twenty when she first met him, but even back then, Conleigh James knew Lincoln James was a game changer. One rejection and eight years later, Con and Linc remain friends, even though the NFL star quarterback has been counting the years since he can finally make his move and Con keeps a respectable enough distance from the only guy she's ever wanted for fear of getting her heart broken again. When the opportunity to get closer than ever to Con comes along, Linc decides it's time to show her with words AND action that they belong together, but will outside forces get in the way of their happy ending that's a long time coming?

Lani Lynn Vale definitely stepped things up a notch in this second book, and while it didn't have me breaking out in tears like the series starter, Mess Me Up, I did love the romance between Con and Linc as well as that bit of suspense that involved the Dixie Wardens and the Bear Bottom Guardians motorcycle clubs. There was no denying just how in love Con and Linc had always been with each other, which is why I was a bit stumped when she acted the way she did when someone tried stirring up trouble for the two of them. The fact that it took two months for someone to make her see sense had me scratching my head. For all the meddling, they could've gotten involved sooner AND Con and Linc needed to work on their communication. Still, I loved Talkin' Trash, and it gets 4.5 stars. ♥