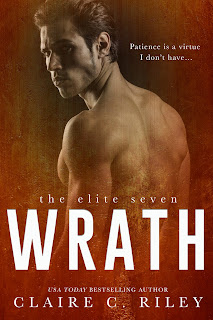 Three books in and I'm still intrigued by all things to do with the multi-authored Elite Seven series. Wrath is the third and latest book, and it's from Claire C. Riley, a new-to-me author. We learn nineteen-year-old Samuel Gunner's story here, a young man who grew up without a mother and who tried to shield his twin sister from the hate spewing from their grandparents and the lack of attention from their father. Over the years, Sam may seem like he's gotten used to being treated as if he were nothing more than the bane of everyone else's existence when it came to the adults in his family, but the anger that resides within him has simply grown to the point that all he wants now is to get revenge on the person who should have put him and Sabella first from the beginning. In order for him to achieve his goal, Sam needs the help of the Elite, and he does anything in order to get their attention. Once he's in, there's a task that awaits him, but while seducing Patience Noelle sounded easy at the start, breaking her heart proves difficult as he falls for her.

I loved the grit and rawness that this book had, and I felt Sam's emotions jump from my e-reader because the author did a highly commendable job describing everything he was thinking and going through. Just like with the other guys who become part of this new batch of inductees into the Elite, Sam is far from perfect, especially considering how he treated Patience even before the whole Elite thing came into the picture. When they meet again, you could feel him begin to re-shift his focus and to not be totally eaten up by his anger. I will admit that his decision to even mention a particular plan to Patience later on in the story had me take a step back because putting someone you claim to love in that position comes with no guarantees that no one will get hurt. The aftermath of that event had me knocking off half a point to my overall rating, but that had to do with my personal feelings and not the quality of the author's writing. I can also kinda-sorta-maybe picture the beginning of the next book, but I could be wrong. Either way, Claire C. Riley did a great job with her Elite Seven story and getting me excited for the next one. Wrath gets 4.5 stars. ♥