Review: Redeem by Christina Lee (Under My Skin #4) 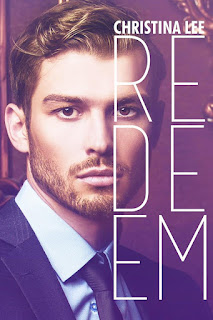 "Eh, villains are pretty misunderstood," he said with a wave of his hand. "Really, they're just underdeveloped antiheroes."

"Screwing up the world one person at a time," I added with a snort.

His amused gaze me mine and held, and the hair on my nape prickled. He was so handsome...so freaking sexy, and I had trouble tearing my eyes away from his mouth, wondering how it might taste against my own.

I found I still wanted him despite his evil ex-boyfriend status.

Who doesn't love a good redemption story, especially when it involves two characters who haven't really been feeling the love ever since they made their respective first appearances in the earlier Under My Skin books? Stewart Jenkins was featured somewhat prominently in all three of the first books, what with his then-boyfriend, Elijah (whose last name I don't recall being mentioned) working at Doggie Styles, a daycare dedicated to dogs, and the aftermath of their break-up playing out in book three. In the case of Michael Walsh, aka Mr. V or V for Voldemort, he was mentioned in passing in both Regret and Reclaim, but really made his presence known in Reawaken, which is the story involving his ex-boyfriend, Jonas Hollis, who preferred being called West. As abhorrent as their behavior was in the earlier books, antiheroes deserve happy endings, too, particularly those who've earned it. And hello, after reading that bonus scene at the end of Reclaim, many fans of the series have been waiting for this fourth Under My Skin novel for months, and Christina Lee has made Redeem worth the wait.

Achieving success in his professional life has been far easier than in his personal life, but financial analyst Michael Walsh is trying to not be the kind of man his father was and has learned a thing or two since his secret relationship with his ex ended. When he engages in an impromptu hookup on New Year's Eve, it's a moment that sticks with him for some time, so when he discovers that the young man he was with back then is the barista manager at the new coffee place near his office, Michael is thrown for a loop. The realization that Michael is actually the infamous "V" that his ex talked about often has Stewart Jenkins shocked as well, but maybe these two villains getting together is a weird sort of kismet. Neither one is looking for their next committed relationship, not after the way their respective last relationships ended, but the two spend time together, and in the process, they open up in ways neither of them did with their exes or anyone else for that matter. This feels like something more, but a promotion may send Michael away, and the very last thing Stewart needs is yet one more person abandoning him.

I know this may sound weird, especially given how their past actions made them difficult to like, but I seriously adored Michael and Stewart together. Finding out who they were and the personal history that they each had made it possible for me to see them in a whole new light. That doesn't mean, however, that their bad behavior in the past is negated, but the fact that these two were actively trying to turn over a new leaf earns them points. Also, they weren't looking for absolution from their exes, meaning the search for redemption was something they were doing for themselves because it was something necessary--a change that they must have known was warranted if they wanted to be better humans. Aside from Michael and Stewart's love story, I also enjoyed seeing Nick and Brin (Regret), Tristan and West (Reawaken), and Elijah and Kam (Reclaim), plus Coco and Chloe. I wonder if there'll be a fifth Under My Skin book and if notable supporting characters--aka Stewart's friend Demetrius and Michael's co-worker James--will be in it, although not necessarily together. Hint, hint. Five-plus stars go to Redeem. ♥

Read my reviews for the Under My Skin series: