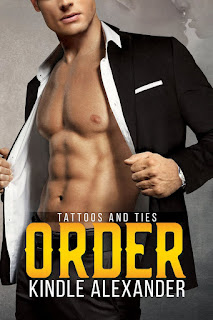 The passionate soul-searing kiss continued until Key jerked free, but Alec followed, tightening his hold as he reached for Key's mouth. He never wanted this to end. Not ever. He'd found his perfect match on a deserted road in the middle of nowhere Texas. He was so ready for this. They would absolutely find a way to be together. The universe wouldn't have put this man in Alec's path and not let him have every part of him.


If I were purely selfish, I'd wish that Kindle Alexander released a book more often than they did, but I'll take what I can get because every single time they've published a new novel, they've made the wait more than worth it. When I finished reading Havoc, I was itching to get my greedy hands on its sequel, and while it did take three and a half months longer than I would have liked, Order was exactly what I wanted and needed. As desperate as I was to read the conclusion to biker and mechanic Keyes Dixon and assistant district attorney Alec Pierce's story, I wasn't quite ready to say goodbye to this two enigmatic but endearing guys.

Tattoos and Ties comes to a close with the second book, and it picks up right after events of the first novel. Alec Pierce has put his feelings out there, but Keyes Dixon isn't entirely sure if Alec is simply confusing lust with love. After all, what does someone like Key have to offer a man like Alec? They're from two very different worlds, and should those worlds ever collide, Key fears he may lose almost everything that matters to him: his club and his mister. But Alec is bound and determined to prove that what they have is for keeps; while their past and present may have wreaked havoc, their love will bring order to their future.

I couldn't get enough of this story and these men! They had a lot of obstacles standing before them, but goodness, there was no denying just how committed they were to each other because you could see it in what they were willing to do in order to ensure the other's safety and happiness. I always have a soft spot for books that have main characters who may seem to be on opposite sides and slash or have different personalities and backgrounds and then as more and more layers are peeled away and their story develops, you see that they share more similarities after all. Gah! I adored Order and give it five-plus stars. ♥

Read my reviews for the Tattoos and Ties series: