Review: How to Bang a Billionaire by Alexis Hall (Arden St. Ives #1) 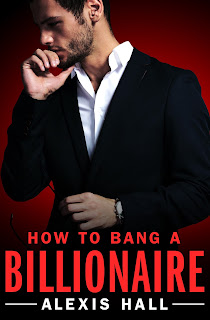 God, how did you explain Caspian Hart? “It’s like there’s all that and so much more, you know? Or I thought there was.” My eyes were stinging again. “He kept showing me…I kept seeing these glimpses. Behind the perfection. Of this…ordinary man, who was kind and funny and sexy and lonely and needed me and—”

And, shitshitshitfuckshit, I burst into tears.

Well, that certainly wasn't what I was expecting...and in all the best ways possible! How to Bang a Billionaire is the first in award-winning Alexis Hall's new M/M contemporary romance series from Forever Yours entitled Arden St. Ives. A billionaire with a sadistic streak and a university student who catches his fancy? Does that sound familiar? Those are the only two things about this book that have an air of familiarity about them because the writing itself is above and beyond that of the trilogy you've got lingering in your mind and the actual story is undeniably original and creative, with specks of levity and bits of angst and two main characters who seem to be contradictions of one another but could very well be the absolute undoing of the other. There's laughter and lust and maybe, possibly, the beginning stirrings of a wholly unconventional and unexpected love between Arden St. Ives and Caspian Hart.

When twenty-year-old university student Arden St. Ives takes over duties as a volunteer telethon operator for his best friend, the last thing he expects is to carry on a conversation with a man ranked as the third richest billionaire in the United Kingdom and a graduate of Oxford University's St. Sebastian's College. When Caspian Hart shows up for a dinner on campus, it's obvious that he is as intrigued by Arden as Arden is smitten by the man behind the alluring voice on the other end of the line. They're equally captivated, but neither one can fathom what it is the other wants with them. Arden doesn't believe himself to be worthy of the attentions of someone as worldly and sophisticated as Caspian, and the billionaire is shielding Arden from his darkest desires, fearful that he'll choose to leave Caspian behind. All Arden wants is Caspian the man, not the billionaire, but all he may get is a broken heart.

I'm guessing Caspian is close to thirty, having graduated from Oxford in 2010, and it isn't just the age that's a vast difference between him and Arden. There's a worldliness and a particular aloofness that sets Caspian apart from the young man that's fascinated him. Arden doesn't keep himself in check as much as Caspian does, barely able to edit or censor himself, almost as if there isn't much of a filter that exists between his brain or heart and his words and actions. To him, he knows what he wants and he tries to not let anything get in his way. However, being "with" Caspian comes with a set of rigid rules and regulations and while Arden is more than okay with doing as he's told within the confines of the bedroom, beyond those four walls, he wants to be able to do what his heart dictates—and that's to show Caspian just how much he wants and needs him, something Caspian is so not comfortable with.

The very Alexis Hall-patented wit was something I knew was going to be there, but the humor caught me by surprise. I didn't know how to react to it, to be honest, but then I realized that it highlighted just how different Caspian and Arden were, but also how Arden was able to bring a fair amount of lightness to Caspian's far heavier disposition. I went into this not having a clue that this was going to be the first in a series, so imagine my shock when I saw the temporary cover for the advanced reader copy and then that cliffhanger at the end that confirmed my "fears". What we get in this series starter is an introduction to the major players—and yes, that includes the mysterious Nathaniel mentioned in the prologue—and how challenging Caspian and Arden's arrangement is. A lot of questions, too few answers, but curiosity at an all-time high and affection for characters this early in the game has resulted in me antsy for book two—due in November—and me giving How to Bang a Billionaire five-plus stars. ♥

Purchase How to Bang a Billionaire on Amazon | B&N | iBooks | Kobo.