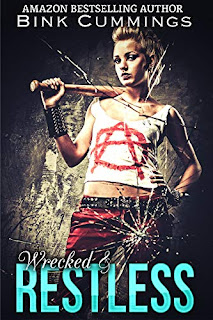 Bink Cummings is back with the next book in her Sacred Sinners MC - Texas Chapter series! Wrecked & Restless is the fourth release but it is the first in the Wrecked duet so it can be read as a standalone set (but if you know me, you know I'm going to recommend you read all the books in the series in order). If you've read the other books, then Rosie should be a more than familiar character, and if you're like me, she's piqued your curiosity. Well, we finally get to know Rosie a whole lot better, but let it be said: her story is heartbreaking and you may need tissues.

We meet Juliette as a young girl who can't seem to find a place to call home. She flits from one foster home to another, but it's at a karate studio under the guidance of a caring sensei that she discovers not only purpose but love in the form of Johnathan. But fate is, at times, a cruel mistress, and with each hit she takes, Juliette transforms. She was once called Rosebud by her sensei and then Rose because she had bloomed, but with everything she's been through, she becomes Rosie, and when push comes to shove, well, Rosie does both harder.

My heart went out to Rosie from the get-go, but even as it hurt for her, it cheered her on. The saying "What doesn't kill you makes you stronger" should have been her motto because every challenge thrown her way may have knocked her down, but she stood back up each time. I don't want to give a whole lot away, but like I mentioned earlier, Rosie's journey is NOT easy, but she is a fighter--a warrior--and time has tested her. If you've yet to discover Bink Cummings's writing, Wrecked & Restless is one heck of a fantastic five-starred ride, so buckle up. ♥