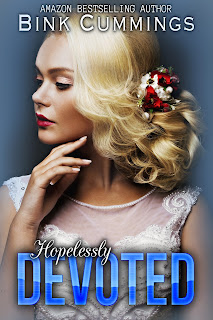 This series has thrown me for a loop! The first cliffhanger had me all antsy, and while the wait was long, it was worth it when book two was released. However, I so wasn't expecting the cliffy at the end of that second one! Going in, this was supposed to be a duet, so I thought Kat and Ryker had their happily-ever-after in sight, but nope! There was going to be a third book, and let me tell you, that cliffhanger ending in the second book was a doozy. So, I've been counting the months, and FINALLY, we've got the final novel in the Sacred Sinners MC - Texas Chapter series, and Bink Cummings has made the oh-so-worthy with Hopelessly Devoted. FYI, this is NOT a standalone, so you're going to have to read the first two novels, Hopelessly Shattered and Hopeful Whispers, before reading this.

Hopelessly Devoted picks up where Hopeful Whispers left off. Ryker is badly injured from the ambush in book two, and Kat steps in and takes responsibility for the most innocent of victims in the whole affair while also being months into her pregnancy and caring for her two daughters. Life has become simplified in some aspects and more complicated in others. I don't want to give too much away, but I appreciated the fact that Kat held true to her convictions for as long as she did. There was no denying that she loved Ryker, but there were other things to take into consideration, so good for her for taking her time in order to make sure that whatever decisions she made next were the right ones for her and her children. Ryker redeemed himself and I have my fingers AND toes crossed that Dickcheese, erm, Kade gets his very own HEA in the near future! Hopelessly Devoted was a five-starred ending. ♥