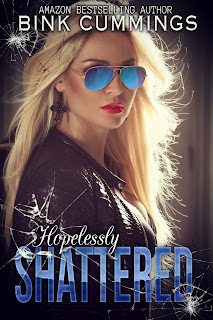 Hopelessly Shattered is the first book in the new Sacred Sinners MC - Texas Chapter series from bestselling author Bink Cummings. I've had this author on my radar for a bit, and all her books prior to this new release are on my to-be-read list. This is somehow loosely connected to MC Chronicles: The Diary of Bink Cummings, based on the author's note at the beginning of the book, but I was able to enjoy the story without any prior knowledge of the events in the aforementioned series. I will, however, get around to checking that series out once I have more free time on my hands. So many books, so little time...

Twenty-eight and pregnant, Kat is on her way to a speck of a town in hopes of gaining information on the questionable circumstances regarding the death of her beloved father. When she gets there, she's in for the shock of her life times two. She isn't sure what to do with the knowledge that's been thrown into her lap, nor how to deal with her ex, who also happens to be the father of her two young daughters, the same man who walked out on her without much of an explanation. Going to the clubhouse of the Sacred Sinners MC in Egypt, Texas was supposed to give her answers. But now, however, she's got even more questions...

Katrina Remington is a woman who has loved and lost two men in her life. One was her father, killed in a car accident when she was only fourteen; the other was Brent, her neighbor whom she fell in love with and who fathered her two daughters, Roxie and Scarlett. She's a strong woman but she also has her weaknesses, and at the very top of that list is Brent. As much as she tries to convince herself that he's an asshole, whenever he seems to be around, she can't help herself. Of course, the fact that when she sees him again he's married to his very pregnant wife, creates a complication that she could have avoided but didn't.

There are quite a few secrets that are revealed in this duology starter, and I liked how it all seemed to tie together and connect Kat to the Sacred Sinners MC. I'm not entirely sure what to think of Brent, aka Ryker, since what he did made him an irresponsible father to his daughters and a jackass to Kat. I won't even get started on the cheating because cheating is cheating, no matter what your feelings may be for the person you happen to be married to. Then there's Kade, who happens to be Brent's younger brother, and while I get that Kat still has a thing for Brent, I have hopes she comes to her senses and ends up with Kade.

With this being just the first in a duet, it does end with the unresolved issue regarding Kat and Brent aka Ryder or maybe it'll be Kat and Kade. I wouldn't really say that it's an evil cliffhanger but yeah, it's still a cliffhanger of sorts. With the second book, Hopeful Whispers, not having a synopsis at the time of this posting, I'm curious to see who she does end up with. The wait isn't as long as you would expect, since the tentative release is set for either November or December this year. In case she doesn't end up with Kade, I'm hoping he gets his own story told later on. Hopelessly Shattered was a good, four-starred duet starter. ♥