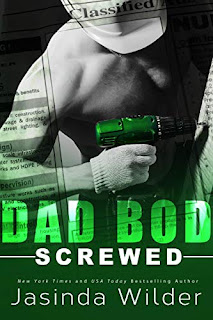 “I loved her, and I lost her and I'm here and she's not, and I'm allowed to love again. Loving again doesn't mean I never loved her. It doesn't mean I'm replacing her. Forgetting her. But it feels like it.”


I knew going into Screwed that it was the fourth and final book in the Dad Bod series, but that still didn't fully prepare me for all the bittersweet feelings I had because saying goodbye to a characters who've made you fall in love with them is never easy. Don't tell the other guys this but I think Jasinda Wilder saved the best for last. Shhh! I mean, I loved the first three books, but this fourth one felt extra special. Maybe it's because James was the one I was always most curious about, and me being the angst addict that I am, I just had this feeling that his story would be the one that had the most angst, and boy, oh boy, was I right. I needed a couple of tissues while reading his story, but it wasn't merely his back story and his moving forward with his life that had me tearing up. There was Nova and the rest of the guys and their women, and gah! It was just everything about this novel that affected me.

James Bod knows what it's like to have loved fiercely, to know in your heart that you've met the one person you want to spend the rest of your life with, and that person was Renée O'Neill. James also knows what it's like to have lost that same person, to realize that all the plans you made together were never going to come to fruition. He's moved forward because he has to--because his daughters, Nina and Ella, needed him--but his heart has yet to love again. No one's really made him want to even try...until Nova Benson. She's beautiful inside and out, and any man would be lucky to have someone like her in their life, but can James really give her the part of himself that she still believes belongs to his late wife? Nova has waited for James, but how much longer is she willing to wait for him?

This book was so much than I was expecting, and given how high the bar was already set by the books the preceded it, suffice it to say that my expectations were nothing to sneeze at. I've read my fair share of Jasinda Wilder's books, but dare I say that this book in particular and this series as a whole is her at her best. i loved how she delved into each of her characters, but especially James and Nova, and the evolution of their relationship and as individuals. Rest assured that this does end in a happily-ever-after--and a much deserved one at that!--but nothing worth having is easy. Screwed puts your heart through the wringer, but it's simply worth it. Five-plus stars. ♥