Review: This Time Around by Aimee Nicole Walker (Road to Blissville #4) 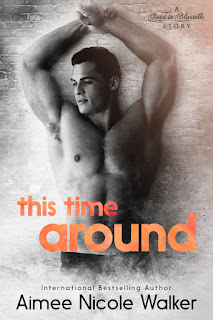 I love how quick the turnaround was between the third and fourth novels in Aimee Nicole Walker’s Road to Blissville series! Just a month and a half or so since the release of Nobody’s Prince Charming, the latest Blissville book is out and about, and it’s a second chance love story fourteen years in the making.

When they were just eighteen and sixteen, Andrew Mason and Milo Miracle were young and in love, but love wasn’t enough for them to withstand the pressures of a long-distance relationship, what with Andy off to college on a baseball scholarship and Milo still in high school in their hometown of Blissville, or Andy having to keep his sexuality a secret from his teammates.

Twelve years later, Andy makes a quiet return to Blissville, but Milo isn’t open to any sort of reconciliation with him. Two years of trying to remain cordial yet cool towards each other is weighing not just on the two of them but those nearest and dearest to them as well. It may take a bit of matchmaking from beyond for them to finally admit that they still love one another, however this time around, they may get their elusive happily-ever-after.

I adore Aimee Nicole Walker’s writing, as evidenced by my love for her books that I’ve read so far (i.e. her Curl Up and Dye Mysteries and Road to Blissville series and her Second Wind standalone). My favorite thing about the Blissville books is that sense of community that she originally fostered in the Curl Up and Dye novels. We get bits and pieces of the supporting characters, so that we’re itching to know more about them and see them fall in love when their turn comes around. With Andy and Milo, we’ve seen them in passing in the previous books, and now we get to find out what led to the demise of their relationship when they were just teenagers and how they both fought their way back to each other fourteen years after.

There were moments that I wondered about Milo’s anger towards Andy, especially given that he was the one who decided to end their relationship years before. I understand that feeling of hurt and betrayal about having to hide what they shared when it came to Andy’s team, as well as Andy not being there when Milo’s twin sister Maegan got sick. Still, it did seem a wee bit too much animosity on Milo’s end, considering Maegan and their parents seemed more than accepting of Andy’s return and held no resentment whatsoever towards the guy. Other than that, though, I did like lighthearted tone amidst the angst due to unresolved issues between Andy and Milo. These two had their struggles, but love wins out in the end. I thoroughly enjoyed their story and the side stories involving their families and friends. 4.5 stars for This Time Around. ♥

Purchase This Time Around on Amazon.