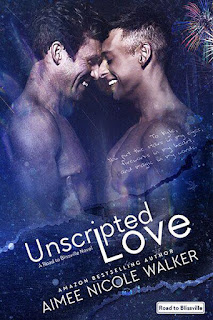 Unscripted Love is my first ever Aimee Nicole Walker read and it's the first in her brand-new Road to Blissville series, which is a spin-off of her popular Curl Up and Dye series. Thirty-six-year-old Kyle Gregory Vaughn's return to his hometown of Blissville was so he could take over his grandfather's veterinary practice and to see if his then-relationship had a chance of surviving. He's still got the practice, but not the boyfriend and he's okay with that because his ex is happy and Kyle is...well, he knows he'll find love sooner or later. It's not as if his attention hasn't been snagged by anyone, but Charles Bailey Hamilton has him all confused. Kyle's pretty sure the attraction is mutual, but Chaz blows hot and cold. Maybe it's the eight-year age difference, maybe Chaz isn't comfortable kissing his childhood best friend's older brother, or maybe it's a simple matter of misread signals. The thing is, Chaz DOES have a thing for Kyle and he'd love to spend more time getting to know him and doing...more. But for any of that to happen, Chaz will have to come clean and confess one secret, but it's one that may kill any hope for more.

Because this is a spin-off, I'm assuming that most of the characters mentioned here were already established ones from the original series. I never had the chance to read any of the books from that previous series, so I have no clue if there was anything from there that overlapped here, but that's what it felt like to me. There were a number of chapters that read more like the author was relaying to me events that had already happened instead of having me experience them alongside the characters. I don't necessarily complain about that sort of things when it happens, but I felt lost, as if I had missed something that I should have already known going in. There was also a lot of back and forth when it came to Chaz. Seriously, had he just come clean early on, he could have spared himself the anxiety and Kyle the heartache and insecurity. I did like Kyle a lot, especially because I could relate to his issues with weight growing up and his love for animals and his family. It took a bit longer for me to like Chaz, but he did win me over, and from then on, I found myself enjoying this love story more. I'm giving Unscripted Love four stars. ♥