Review: Someone to Call My Own by Aimee Nicole Walker (Road to Blissville #2) 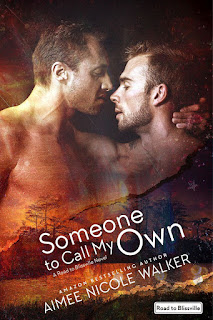 Ooh! Aimee Nicole Walker took things up a notch with her second novel in her ongoing Road to Blissville series, which if a spin-off of her Curl Up and Dye Mysteries collection. Someone to Call My Own gives us the love story between two men who have suffered their own deep, respective losses and struggle with the realization that Fate has brought them together. Blissville was neither Emory Jackson's nor Jonathon Silver's home, but it took Emory losing his husband in an accident and Jon's brother being murdered for them to even step foot in this Ohio town.

Even five years later, Emory is still mourning the loss of his River, but it appears River has other plans. Having mysteriously gained psychic abilities after the accident that left him a widower, Emory is still able to communicate with the husband he continues to love. It takes some pushing and prodding but River convinces Emory to leave the home they built together and to move to Blissville. Reasons aren't given, but it's one particular vision that leaves Emory shaken, because there's no way he could ever fall in love with someone else, no matter how real it seemed.

On the other hand, Jon wasn't one to do relationships. He doesn't even do repeats. He's still trying to get his footing in this new life he finds himself in. After the brother he had recently met was murdered, everything was left to him, and yet Jon feels out of place in the stately home and in an unfamiliar business setting. When he meets Emory at a dinner with mutual acquaintances, Jon is at a loss once more. This time, it's due to the man with eyes filled with pain and sadness--a man who calls to him unlike any other man before. Can he ever call Emory his own?

What a journey this was for Emory and Jon! These two resisted the pull to one another, though more Emory than Jon, but I quite liked it because it added this extra layer of complexity to their story. It would have been rather anticlimactic, after all, had they jumped into a relationship--or in bed!--simply because of that first meeting. Having a connection is one thing, but with all the resistance and avoidance, it did take them a while to even get them to a point where they weren't merely going through the motions of being courteous, making for a delicious slow burn.

There were moments that I was really frustrated with Emory, but when I took a step back and tried to see things from his perspective, I understood why he held back for as long as he did. We can call his feelings of guilt misplaced, but to him, they were very real. What he and River shared together was true love and they had a life as husbands, so I get why Jon seemed like an interloper to him even though it was River pushing them. Of course, he came to his senses, because come on! If anyone deserved love and happiness in their lives, it was Jon and Emory.

This second book in the Road to Blissville series reminds me that I should work my way through the Curl Up and Dye series because I'm curious as to how Gabe Wyatt and Josh Roman fell in love. There are also a a number of new supporting characters who I wouldn't mind reading more about either, namely, Emory's cousin Memphis and Jon's two best friends and fellow former black ops, Beau Rossi and Corbin Bouchard. Of course, I'm looking forward to even more from the town of Blissville and hope they're as fantastic as the 4.5-starred Someone to Call My Own. ♥

Purchase Someone to Call My Own on Amazon.