Review: It Takes Two to Tumble by Cat Sebastian (Seducing the Sedgwicks #1) 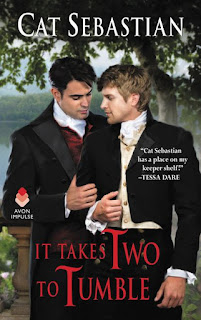 Note: This ARC was provided by HarperCollins via Edelweiss+ in exchange for an honest review.

“I’m not ashamed of who I am or who I want to touch. And I don’t believe in sin.”

Sedgwick waved his hand in frustrated dismissal. “I tell you, there’s no shame between us.” He gestured between their two bodies. “Nor any sin.”

“Oh?” Phillip was playing with fire, and he knew it. “Then what is there?”

Cat Sebastian's debut series, Turner, guaranteed she had me as a fan for life. With the release of the beginning of her new Seducing the Sedgwicks series, she's proven that she isn't a one-hit (series) wonder, though that first series showed three times over what she was more than capable of. The time is 1817 and we find ourselves in the town of Kirkby Barton. Thirty-five-year-old Phillip Dacre has dedicated his life to the sea, captaining his ship and only making it back to to Barton Hall every couple of years or so. The passing of his wife, Caroline, meant their three children, thirteen-year-old Edward and nine-year-old twins Margaret and James, were under the tutelage of their aunt, tutors, and the household staff. But Phillip realizes that as much as he prefers being at sea, he will need to spend two months with the very children who have grown up without much of his presence. He returns to three children who look at him as more of a stranger than their father. They seem to prefer the company of the vicar, twenty-six-year-old Benedict Sedgwick, who seems to hold the captain in as much regard as his own three children.

Ben is betrothed to his best friend, Alice Crawford, and has dedicated his life to his vicarage. He wants to be able to be of service to the people of Kirkby Barton and wants to have the family that he and his four younger brothers were never able to have with their wayward father at the helm. When he meets Phillip, he thinks to himself that the man will never succeed in winning his children over. He may appreciate the man's insistence on order and discipline, but Ben knows that the three Dacre children also need love and affection. Their first impressions of one another may not exactly be all that stellar, but soon, they forge an unlikely partnership in hopes to create a more stable home life for Ned, Peggy, and Jamie, all nicknames that Phillip did not realize his children had. But it isn't just Phillip creating a relationship with the children; he and Ben grow closer with each passing day, and the attraction they have is growing more difficult to ignore. But what can come of all of it when Phillip returns to sea and when secrets threaten the plans that Ben has held on to for years? Can the love of two men shore up a future together?

Le sigh. This book was NOTHING like the first three novels that the author has published via Avon Impulse, and that's an absolutely great thing. Why? Not because the Turner books weren't good. On the contrary, they were amazing. It Takes Two to Tumble is nothing like them in that it has its own story to tell and doesn't share anything in terms of story line with the other Sebastian-penned novels. Phillip and Ben seem to have their lives in order but they find themselves adrift when challenges to best laid plans come along. They're forced to make choices they probably never even considered having to face. Neither man wants to hurt anyone--not their families nor those they hold near and dear. They're essentially good men who want only to have purpose, family, and love. Their sexuality is obviously something that cannot be spoken of openly, but there's no denying how much they love one another by the end of the book, and how they dedicate themselves to each other and to their respective and joint purposes. And now I'm curious as to what awaits Hartley Sedgwick and if he shares his story with one Martin Easterbrook. Until the release of the second book in the series in July 2018, however, I'll simply have to content myself with encouraging all to peruse It Takes Two to Tumble, which receives five-plus stars and is a 2017 favorite. ♥