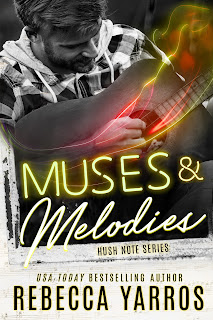 The man who'd never written a song about a woman had written one for me.

My hands flew to my mouth as the emotions of the last year swept over me, filling every cell in my body with the simple truth that I loved this man. I would always love this man. There was no getting over Nixon Winters, even if I wanted to.

Not now. Not ever.

When the Hush Note series was announced a few months ago, it may have been one of the most memorable book announcements in my lifetime. Why? Sarina Bowen, Devney Perry, and Rebecca Yarros are three of my favorite go-to authors, and I've mentioned many times over how any combination was on my dream writing duo list. Instead, what I got was something even better--three interconnected standalones, one from each author. I seriously liked Lies & Lullabies by Bowen, and I loved Muses & Melodies by Perry, but Yarros's Muses & Melodies? This was everything I could have asked for in a romance novel, but done so in a way that still managed to surprise me beyond words--which is a rather difficult feat considering I've read every single novel and novella from this particularly gifted author.
Muses & Melodies is the third novel in the Hush Note trilogy, which basically means it also closes out the series and has done so in remarkable fashion. If I were desperate to slap a label on this, the only one that would be somewhat acceptable is "rock star romance", but even that seems rather meh considering what lays between the proverbial covers. This is, at its core, a romance, yet there's also far more to it than just the story of two people who fall in love and snag their happily-ever-after by the end. Here we have the tale of one broken soul and one heart that refuses for said soul to remain broken. Nixon Winters is a star and his gift of music is undeniable, but at only twenty-seven, his life was careening towards being the next member of the 27 Club. And then after his latest--and longest--stint in rehab, Nix finds himself stuck with a babysitter: twenty-six-year-old assistant (to the band's) manager, Zoe Shannon.
This may sound strange, but I don't consider this book your typical "feel-good romance". Oh, there are moments that will definitely make you feel good, and yes, there's romance, but Rebecca Yarros has always been the author I automatically turn to when I want "the feels", and that includes angst. This has angst, and there are points in the story that may be a wee difficult to read, particularly when Nix struggles with his addictions. And those struggles? Well, they're a reflection of what countless addicts have to deal with every single day of their lives. Ultimately, Nix wins his constant war with addiction, but again, it's something this character will face till the end of his days. Because that's reality, and while a lot of romance novels provide an escape, I appreciate the dose of realism, and Yarros has done that masterfully well from her debut release to this latest one. I loved Zoe's drive and determination, her passion for her work, as well as her devotion to Nix. And then there's the rest of Hush Note--Jonas, Quinn, and Ethan. Their love for Nix was enviable and admirable. Wouldn't life be so much easier if we all had support systems like the one Nix had? But at the end of the day, Nix reminds us that the choice to be sober--to be better--has to come from within and has to be for yourself. Muses & Melodies inspires and yes, it makes you feel so damn good. Five-plus stars. ♥
PS: If you're a true-blue Rebecca Yarros fangirl and have read ALL her stuff, you may find Zoe's Colorado hometown a wee bit familiar. It's a Legacy worth revisiting, aaaaand I'm hoping it's a sign of things to come from this author. But then I'll read anything she serves up. Yes, people, she is THAT good of a storyteller, so chop-chop! Get reading!
-------------------------
Read my reviews for the Hush Note series: