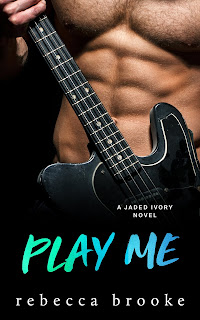 Rebecca Brooke wraps up her Jaded Ivory series with story of the last remaining member of the band to find love and settle down. Except Jackson Hadden already found love once, or at least he thought it was love. He was madly in love with her and even had plans of settling down but then Megan Randall disappeared without a word, ghosting him in such a way that he's spent the next seven years not trusting women easily. He doesn't need love or a relationship anyway. He's happy that his friends have found their significant others and that Jaded Ivory continues being one of the biggest rock bands in the world. Life is good...and then his past returns and literally walks right into him. Megan wants nothing more than the opportunity to finally explain what happened seven years ago, but Jackson makes it clear that he isn't the least bit interested in whatever she has to say. But no matter how much Jackson wishes Megan would just stay in the past, fate appears to be hellbent on making sure their paths cross again. Is this their chance for forgiveness and moving on or could this be their new shot to get it right?

Play Me was the perfect way to close out the Jaded Ivory series, which has turned out to be such a great collection of stories about the members of the eponymous band, which funnily enough is the second time I've read a series with the same title and band name, but thankfully, both were distinctly different yet both wonderful collective reads. Can I just say that I liked that there wasn't this immediate rush for Jackson and Megan to get back together? He was too angry, and she would have been happy for them to, at the very least, be okay. And then the story went in a direction that I had not seen coming, yet not only did I appreciate what the author did but I also loved that this was something that created a refreshing new texture and layer to Jackson and Megan's love story. A quick side note: Rebecca Brooke wrote a short story entitled Ring Me as part of the Jordyn's Army anthology a couple of months ago, so if readers are wondering how one particular scene between one particular member of the band and their significant other plays out, it's in that collection. Play Me gets 4.5 stars and it can be read as a standalone. ♥