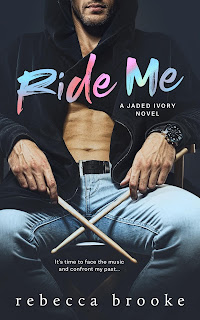 I was looking forward to reading Ride Me, the second novel in Rebecca Brooke's Jaded Ivory series, since I first read the blurb for it. I also make no secret of the fact that I'm an M/M romance fangirl, and when an author who's known for M/F romance tries their hand at M/M, I get really curious. This second book is the story of twenty-six-year-old Sawyer Alason, drummer for the up and coming rock band Jaded Ivory, who has an unexpected reunion with his best friend. It's been seven years since Reagan Setton last saw the guy who had been his best friend since they were children. Sawyer had disappeared without a word after they had graduated from high school, and while Reagan would love to catch up on everything they've missed over the years, what he wants more is an explanation. But how the hell is Sawyer supposed to tell Reagan that the reason he left was because he's been in love with him since he was sixteen? He couldn't deal with the possibility of his best friend's rejection back then, and it's the same reason Sawyer is mum again. Now though, keeping his sexuality secret is a necessary evil for himself and the band.

I loved Rock Me, the Jaded Ivory series starter, and went into Ride Me with hopeful expectations. This wasn't just an M/M romance, but one about best friends bonding once gain after years apart and then falling for each other--or well, one falling for the one who's been in love with him for years. I liked Sawyer and Reagan, and I got where the former was coming from with the whole secrecy thing. However, this is one of those stories where you need to suspend your disbelief to a certain degree. Basically, Sawyer is part of a band that's already enjoying a fair amount of popularity and recognition, so the idea that any time he's hooked up has gone unnoticed seems iffy to me. Then there was the nearly uncomplicated manner in which he and Reagan fell into a far more intimate relationship. Speaking of said relationship, there was more telling than actual showing, and while I liked that they had gone from being friends to more, I wished I had been able to experience the transition alongside them rather than merely being informed of everything that had happened. So, I was left wanting, leading me to award this 3.5 stars. ♥