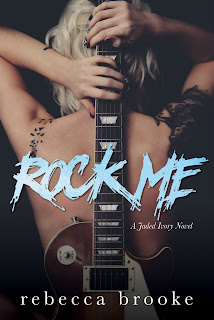 Rebecca Brooke is a new-to-me author, though if you look through my ebook purchases on Amazon, you'll know that I've bought a few of her books in the past but haven't gotten around to reading them. Yes, I'm a book hoarder, and yes, I do plan on actually reading all the books I buy. That's what they're there for--to read. Anyway, I digress. Brooke's latest release is the first in her brand new series, Jaded Ivory, which is the name of the band the female main character is part of in this series starter. From what I've gathered, this particular sub-genre--rock romance--is a new venture for the author. Well, it certainly didn't feel like it! But then maybe it's because this was more than "just" a story about someone making a name for themselves in the music industry and then suddenly finding love.

This is Mari Cosmann's story of rising beyond the role of victim and becoming the person she chooses to be. She was once bullied and the focus of negative attention. Now, she's receiving attention yet again, but the kind that she can bask in. One person in particular whose attention has been caught is Cole Wallace, and he would love nothing more than for Mari to return it. However, she makes it clear she wants nothing to do with him. When the former NFL star turned high school teacher and coach finds out why, the guilt gets to him. The realization that he was one of Mari's tormentors in high school makes him desperate to make amends. He's falling for Mari, and he wants to prove just how much he's changed over the years. She's rocked his world, but will he have a chance to rock hers?

The author tells Mari and Cole's story well and it was near impossible for me not to become as emotionally invested as I did with these two. There's redemptive feel to the story, what with Cole having been such a prime player in what happened to Mari years prior. Maybe it does become easier for Mari to forgive Cole because of her feelings for him, but forgiveness here isn't given freely. I liked that Cole had to earn it and that it was forgiveness he was hoping for, not absolution. The journey to getting to that happily-ever-after of theirs is by no means easy, and there are moments where they take a step forward and then take a leap back, but they do get to it, and they gain so much more than love and sex; they also find peace. Rebecca Brooke's Rock Me did, indeed, rock me. Five stars. ♥