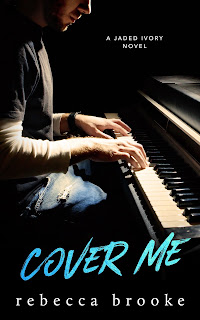 Cover Me is the third and latest novel in the Jaded Ivory rock star romance series from Rebecca Brooke. After a great start, the series faltered for me when it came to the second book, which was disappointing considering M/M romances hold a special place in my heart. Fortunately, this series has bounced back with the release of book number three, which features fictional rock band Jaded Ivory's twenty-seven-year-old keyboardist and all-around good guy, Heath Marshall, and twenty-six-year-old (although she's stated to be twenty-five later on in the book) cocktail waitress Jenna Forino. Heath notices her the moment she's within his periphery, and when he steps in to rescue her from an aggressively rude customer, the connection between them is fortified. One hot night together doesn't lead anywhere, not when Jenna decides to throw away Heath's number, especially after learning that he was a rock star. Heath is disappointed he hasn't heard from Jenna, but a few months later, she finally makes contact, and the reason behind it's going to change their lives forever. Can Heath prove to Jenna he's going to stay?

Ah, Heath! The guy may have been a bona fide star, what with being a member of one of the hottest bands around, but he had no airs about him. He was the pacifier in the group, the one who loved the music and the fans, but could have done without the paparazzi and intrigue. I liked how he was with the rest of the band--and they really were like family--and how he was with Jenna in particular. Jenna, on the other hand, wasn't exactly all that easy to like. She had made up her mind about Heath based on whatever preconceived notions she had floating around in her head, and you know what they say about people who assume. She was stubborn and hard-headed, and it took a good, long while for me to feel anything other than frustration for her. However, she did manage to win me over in the latter half of the book. While these two did hook up rather quickly, their romance is more of a slow burn, so don't expect this to be a quickie read or anything of the sort. We also get the rest of the band--and those with significant others will be present, too!--making it more entertaining of a read. Cover Me gets 4.5 stars. ♥