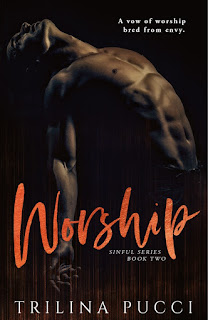 “Qualunque cosa stia succedendo tra di noi non è nulla che mi sia mai aspettato, ma non so come smettere di volere che ciò accada. Mi fai sentire debole, Gretchen, e non sono sicuro di cosa fare al riguardo.” Whatever's happening between us is nothing I ever expected, but I don't know how to stop wanting it. You make me feel weak, Gretchen, and I'm not sure what to do about that.

Trilina Pucci's leveled up with the second book in her Sinful series, and if readers like me fell in love with Dominic King and Drew Matthews's story in the series starter, Truth, then I wouldn't be surprised if they become totally obsessed with Luca King and Gretchen Andrews's tale of taboo but true kind of love. Worship takes place after the events in the first book, and while it is about a different couple, I'm highly recommending that the books be read in order of release because there is a story arc and there are recurring characters, plus for overall reading enjoyment.

Luca King and Gretchen Andrews have shared a connection from the moment they met, but it's a connection that they can't readily explore. Luca is married and has a daughter who's less than a year old, and Gretch is simply not the kind of woman that would choose to be the reason a marriage crumbles. The thing is, Luca's marriage was doomed from the beginning, and he sees a future with Gretchen. Their feelings for one another grow quietly but surely, tempting them both. But Luca is also a man who intends to teach those who cross him a lesson, and he intends for his wife to learn a thing or two, even if it means having to stay married to this woman he does not love.

Goodness but how the tension in this one had me at the edge of my seat! I know some readers don't like reading romances that have one or both of the characters married or committed to other people, but there's a little bit more to the story than meets the eye, so it may be worth pushing the envelope for those naysayers. I loved getting to know Luca and Gretchen even more in this book, and while Luca did share similarities with his twin brother, it was clear that Luca was his own force to be reckoned with and that Gretchen was a woman who had convictions and stood by them. My heart empathized with both of them as they struggled with their circumstances but I also cheered them on because they were clearly in love and committed to a future together. Five-plus stars for Worship. ♥

Read my reviews for the Sinful series: