Review: Prince of Death by Sam Burns & W.M. Fawkes (Lords of the Underworld #1) 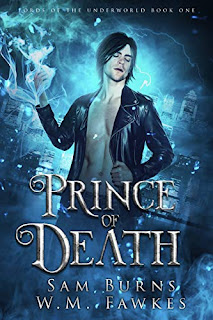 Both Sam Burns and W.M. Fawkes are new-to-me authors and their first collaboration--which also happens to be the kick-off to their Lords of the Underworld urban fantasy series--was certainly an introduction that guaranteed I'd be eagerly awaiting the next book in the series and that I'd be checking out their respective back lists. Inspired by elements of Greek mythology, Prince of Death is the story of Lysandros, the youngest and only son among the children of Hades and Persephone. He's been shielded from the harsh realities going beyond the underworld. On the other hand, Theodore Ward, a professor in the Banneker College of Magic knows all too well how harsh life can be. When he's given the opportunity to rescue his mother from the underworld, he isn't quite prepared to cross paths with its lone prince. Lysandros knows staying away from Theo would be best, but he never counted on meddlesome, matchmaking sisters and conspiratorial gods to bring them together or that they'd have to join forces in order to put a stop to a Zeus-sized storm.

This series starter was a great change of pace for me since I've been reading more contemporary romances as of late. Since both authors are new to me, I wouldn't be able to tell you who wrote what, but then it's highly possible that I still wouldn't be able to do so even if I had read their stuff before given that I couldn't even tell that two people had written this. In short, there's a seamless nature to their writing, which is something I always look for when there's more than one author behind a story. Burns and Fawkes also deserve kudos for what I consider an awesome re-imagining of the myth of Hades and Persephone. I first fell in love with Greek mythology when we studied it in my English class back in high school, and this book was like revisiting a particular myth while also glimpsing something for the first time. Lysandros and Theo were definitely an interesting pair of main characters, and they and their story was anchored well by Hades and Persephone and the rest of the cast. Burns and Fawkes have a 4.5-starred winner with Prince of Death. ♥

Purchase Prince of Death on Amazon.