Review: The Other Side of Wrong by Christi Barth (Bad Decisions #3) 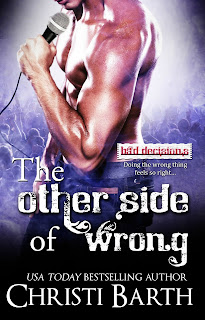 The Other Side of Wrong is the third novel in the Bad Decisions series penned by Christi Barth, and while each book is about a different couple, I highly recommend that the books be read in order. There are characters who recur throughout the series, and in order to have a more well-rounded reading experience, I think reading everything according to release date will really help.

Jake McQuinn loved everything about being part of a band and living the life of a bona fide rock star. When he’s forced to return home and go back to a “normal” life, he feels lost. He knows he needs to be there for his family, but the family he’s created with his needs him just as much. When pop star Cassidy gets involved, will Jake choose to do the right thing? But what is the “right” thing?

Like the two books before it, there’s a fair amount of angst in this third Bad Decisions story. I get Jake feeling like going back home was the responsible thing, but I seriously wanted to shake him so he would see sense. Yes, family should come first, but family isn’t necessarily always the one you’re born into, and there has to come a point where one should put themselves first for a change.

Kudos to Cassidy for knowing what she wanted and going after it. She was a woman with her own mind, and she did what she felt was necessary—within reason—in order to achieve her goals. I liked Jake’s connection with her as much as I did his relationships with his band mates. The Other Side of Wrong was an okay read but it did feel a bit lacking, resulting in a three-starred rating. ♥

Purchase The Other Side of Wrong on Amazon | Apple Books | B&N | Kobo.