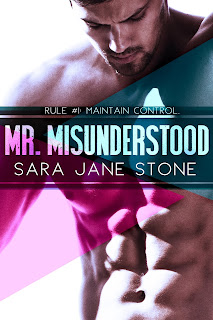 Note: An advanced reader copy (ARC) was provided by the author via Author's Pal.

It's been a while since I last read something by Sara Jane Stone, so her latest release was certainly something I couldn't pass up. Mr. Misunderstood is a friends-to-lovers slash fake engagement story about perennial bachelor slash playboy Gavin Black and his best friend, divorcée and animal lover Kayla Greene. Their friendship goes back to when they children, so when Gavin finds himself being blackmailed by his last girlfriend, the one person he turns to is Kayla. Maybe the best thing to ward of any negative press that would potentially wreak havoc on his reputation and the business he's created would be to change the narrative before it even begins. Kayla agrees to help Gavin out, and in return, Gavin will provide his support of Kayla's motley crew of four-legged furbabies. Everything should go smoothly; after all, Gavin is known for sticking to his rules, particularly rule number one: always maintain control. However, he never expected to start falling for the girl he's known almost all his life, and controlling his feelings for her isn't nearly as difficult as proving to Kayla that they deserve a real happily-ever-after.

This author has always been able to give me the le sigh moments I crave and she's certainly done it again with this new standalone of hers. Friends-to-lovers romances are a personal favorite of mine, although fake relationships aren't something I've been known to be a fan of. Thankfully, this had the unique touch of the main characters already being in a friendship, instead of the usual strangers pretending to be in a relationship. I adored Gavin and Kayla, and the added bonus of Kayla's menagerie of furry misfits had my furbaby-loving heart beating with joy. I liked that there was a hint of angst in the story, courtesy of the past that Gavin was desperately trying to keep out of the public eye. The motivation behind the whole blackmailing scheme took me by surprise, and Sara Jane Stone deserves kudos for that. Overall, Mr. Misunderstood was an entertaining and lovely read, and I'm giving it 4.5 stars. ♥