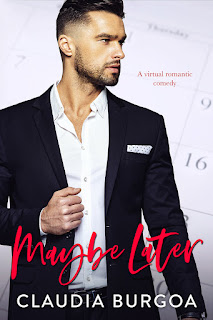 Even though I've read almost all of Claudia Burgoa's books, she's still managed to surprise me in the best way possible with her latest release. Maybe Later is a romantic comedy with parts of it written in a somewhat epistolary manner, although I know there are purists out there who insist that epistolary only concerns actual letters and nothing digitally transmitted. Told from dual points of view, we're introduced to thirty-four-year-old business mogul Jackson Spearman and twenty-eight-year-old virtual assistant Amy Walker. They don't exactly get off on the right foot when Amy takes over as Jackson's VA when his long-term one goes on maternity leave. He likes things a certain way and she likes to shake things up. Over time, though, the two form a conciliatory truce and even begin to nurture a kinship of sorts. As the line between professional and personal becomes blurred, Jackson meets the lovely Emmeline and Amy is drawn to the charming Jack. With their attentions snagged by other people, the last thing Jackson and Amy should be doing is thinking about each other in a totally unprofessional way. Right?

I loved the back and forth between the two main characters. The snark and sass made for some highly entertaining moments, and provided a great foundation to this enemies-to-lovers story. One of my close friends happens to be a virtual assistant, and she's had her fair share of...umm...difficult clients, and I'm pretty sure she wishes she could put them in their place as pointedly yet politely as Amy did with Jackson. Claudia Burgoa does angst well, but as a romance reader in particular and a book lover in general, she doesn't hesitate to dip her toe in other romance sub-genres because it's clear that she's got a firm handle on what it takes to write a great rom-com read. Now, it doesn't take a genius to figure out what's going on between Jackson and Amy, but let me just point out that there's more to their story than you think there is. And I'm going to leave it at that because I really hope you'll pick up this book and fall in love with the unconventional romance that Burgoa has created for fans and readers, old and new. If you've got time to spare--or if you don't, make time!--for a fab, fun read, check out the five-starred Maybe Later. ♥