Review: Kiss and Break Up by Ella Fields 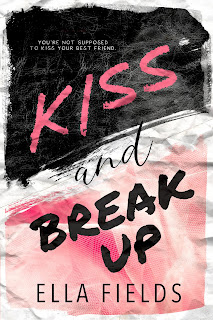 Ella Fields was a highly recommended author by quite a few of my fellow book-loving friends, so when an opportunity to read and review her upcoming release came about, I knew the moment had come for me to dive into my first ever Fields book, and my, oh my, how I loved wading around in all that lovely angst! Kiss and Break Up is a mature young adult (YA) read, and as I mentioned, there's a fair amount of angst that's there, but such is the story of best friends before birth Dashiell Thane and Peggy Newland, aka Dash and his Freckles. Had Peggy been given a choice, she says she would never have chosen Dash as her best friend, but he never really gave her the opportunity to say "no" once he had dumped cold water over her, thus basically baptizing her as his bestie when they were children. Now in their senior year, all it takes is one kiss for their world to be thrown into total disarray.

One of the most fascinating things about this story has to be Dash and Peggy's friendship. No, I'm not talking about how they become lovers, but how they were always friends first and that there really was genuine, albeit somewhat dysfunctional, kinship that they shared. These two had to be the unlikeliest two people ever to even consider becoming best friends, yet somehow, their friendship worked. Their mothers may have been best friends first, but Dash and Peggy's own friendship survived the implosion of that older relationship, and even as Peggy and her mom left their neighborhood--and Peggy's father--for more humble yet homey and comfortable digs, these two were able to continuing forging and solidifying a strong kinship based on trust and affection. They do end up falling in love as teens on the cusp of adulthood, but there was no denying how much they valued their friendship.

This being my first ever Ella Fields read, I finally get what all the hype has been about. Fields clearly has a firm grasp on the story that she wants to tell and does it well, balancing all her elements without unnecessarily going overboard or needing to overdo anything just to evoke a reaction from her readers. I was all in when it came to Dash and Peggy's story, wanting to see how these two teenagers would face up to the challenges of not just the change in their relationship but in a whole host of things around them. These two are teens, and more often than not, their actions and corresponding reactions felt authentic to me. Aside from their friendship and romance, I also liked seeing how their relationships with their respective sets of parents and circle of friends changed and how they made adjustments. Kiss and Break Up may have been my first from Fields, but it won't be the last. Five stars. ♥

Purchase Kiss and Break Up on Amazon.