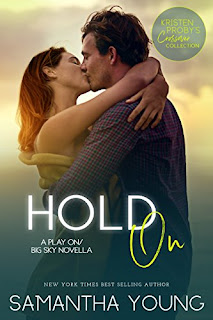 Hold On is a novella penned by bestselling author Samantha Young and it's the third release in her Play On series and the seventh book in the multi-authored Kristen Proby Crossover Collection, making it a part of Proby's Big Sky series as well. Published by Evil Eye Concepts, Inc., which also publishes the 1,001 Dark Nights stories, each of the stories in this crossover collection may be read independently of one another, although I do recommend you check out Young's As Dust Dances, the second full-length Play On novel, which is a personal favorite of mine from 2018.

Twenty-five-year-old Autumn O'Dea heads to a ski resort in Montana in hopes of finding some direction and purpose in her life. While there, she literally crashes into thirty-three-year-old Grayson King, a ski instructor who happens to head his own construction company. The connection between them is sure and swift, but even when they decide to pursue their feelings for each other, the fact that Autumn's home is with her brother back in Glasgow, Scotland and Gray's is right there in Cunningham Falls, Montana with his own family. They know, without a doubt, that they've found "the one" in each other, but will true love prevail when a whole ocean separates them?

I know stories that have insta-love in them aren't a favorite with some romance readers, but I choose to see Samantha Young's latest release as more of a story about true love and how, when it finds you, you should hold on to it. I've read both Young's Play On series and Kristen Proby's Big Sky series, and I must say that Young did a great job melding both worlds together. I'm a wee bit of a cynic (yes, I'm a cynical romantic, go figure!), and yet I was on board when it came to Gray and Autumn. Yes, it was quick, and yes, it may seem fantastical, but just because it hasn't happened to me doesn't me finding love in a short amount of time isn't possible. In less than a hundred pages, Young created a love story that made put a smile on my face and my heart swooning. Five stars for Hold On. ♥