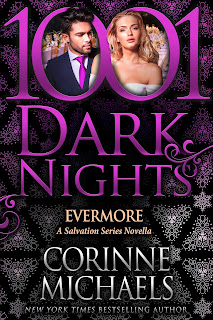 Corinne Michaels launched her writing career with the release of Beloved, the first in her Salvation series. After five full-length novels in that series, she’s gone on to release a couple of other series as well as a co-authored standalone and inclusions in multi-authored collections and anthologies. Now, she returns to the world of Salvation with her newest romance, Evermore, which is a novella published through the 1,001 Dark Nights imprint from Evil Eye Concepts, Inc.

Gretchen Burke lives for her lists; they keep her organized and on track. Getting left at the altar, however, was NOT on her life list, and now, Gretch is feeling the need for change. A new job has her moving from her hometown of New Jersey to Idaho. It’s there that she reunites with Benjamin Pryce, her childhood best friend who moved away and never wrote to her. Idaho is her second chance at living again, but could it also mean her second chance to be with the guy she first loved?

This was a good read about two people who were best friends at the cusp of something more before they had to part ways and then have an unexpected reunion years later. There was a hint of angst due to what happened to Ben while he was a SEAL, otherwise, it was a fairly light read compared to the full-length books in the series. I liked reading about their rekindled friendship and how there was always something greater that existed between them that they were just now exploring.

I wondered why Ben never got in touch with Gretchen after he and his family moved away, and I recall Gretchen wondering the same thing, but she never really asked him and Ben never offered up any explanation. These two did, however, share a pretty strong connection, and even when Ben did some waffling, it was clear that he and Gretch had always been meant to be. I’m giving Evermore four stars out of five stars, and can’t wait for Corinne Michaels’s next Salvation book. ♥