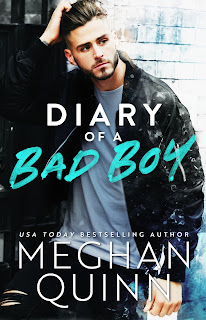 Meghan Quinn dishes out her second romance about a trio of millionaire best friends, and we've definitely got ourselves the baddest bad boy of the bunch. In Diary of a Bad Boy, Quinn takes on the enemies-to-lovers trope and she's paired up a thirty-two-year-old Irishman named Roark McCool who was cool under pressure but also had a hot temper and a twenty-four-year-old Texan native named Madison Grace Green who had a touch of Southern sass that worked to her advantage on the mean streets of New York. When a brawl at a Gray's Papaya has Roark and Madison end up mistakenly picking up the other's phone. A switch would seem simple enough, but Roark has suddenly made pushing Madison's buttons his current life's passion. Truth be told, he wants more of feisty Madison's attention and time, but learning that she's his top client's daughter is a reminder that someone like he isn't worthy of someone like her. He's nothing more than an Irish rebel without a cause and she deserves far more.

With the humor always comes the angst, and no one does it quite as well as Meghan Quinn does. She's got herself another fabulously funny romantic comedy in Diary of a Bad Boy, but as I've come to expect when it comes to her books, there's almost always that initial moment where you stand up and pay better attention to the characters because there's a bit of brokenness there. In the case of this book, it had to do with Roark and his childhood and ties to the family he wishes he could fully turn his back on. Sigh. I swear, I wanted to give the guy a long hug and tell him that it was okay to wash his hands of them, but yeah, easier said than done. Sure, Roark was more or less an asshat in the first few chapters, but just like Madison, I fell for him, hook, line, and Irish brogue sinker. He had a deep affection for and loyalty to the two best friends he considered true brothers--Bram Scott (whose story is told in The Secret to Dating Your Best Friend's Sister) and Rath Westin--and went above and beyond for all of his clients.

Madison was a breath of fresh air in that she wasn't this overly insecure woman who felt that she needed the constant approval of her father or that being with someone like Roark would complete her. She was her own person who just happened to love her dad and didn't want to disappoint him, and she certainly was living a good life even better Roark came along, so he basically enhanced it, but yeah, she wasn't desperately seeking a ring on her finger. She knew what she was worth and wasn't willing to sit idly by for less than that. Madison and Roark pushed and pulled and went back and forth, and they made for one hell of an entertaining and endearing read. It was nice seeing bits (not the dirty kind!) of Bram and even Julia Scott, and I'm naturally wondering what Meghan Quinn  has up her sleeve for broody Rath, especially with a hint of it being maybe-kinda-sorta a second-chance romance? Either way, I'm excited to read it, but for now, go and read the five-starred Diary of a Bad Boy. *smiles* ♥

Read my reviews for the Millionaire Romances series:

Purchase Diary of a Bad Boy on Amazon.